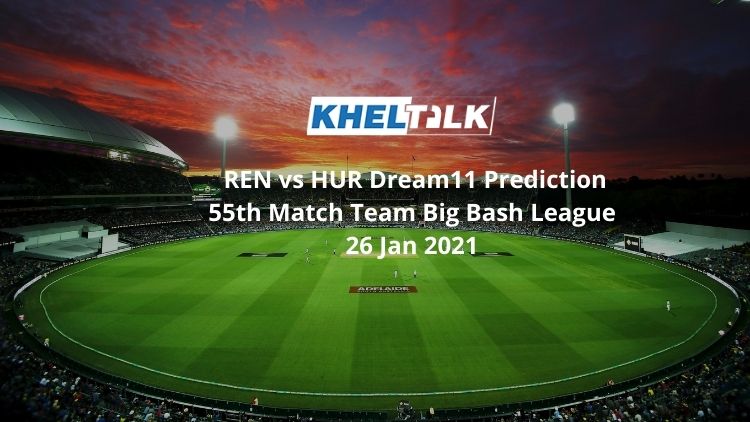 The pitch will offer support to the batsmen and we can expect something around 170 at this venue. The spinners will be playing a crucial role in this contest. The team batting first will have an upper hand.

A perfect sunny awaits us in Melbourne on Tuesday. We can expect the climate to just too good for the game. The temperature is expected to be 24-degree Celsius and the humidity to be 57%.

Both the teams will look to field first at this venue and will be looking to go in with more spinners. We can expect the all-rounders to play a major role here.

Despite having a strong squad, Melbourne Renegades are having a forgettable tournament and are at last place currently.

Renegades are playing for pride which makes them even more dangerous here. The team will prefer to bat first compared to chasing because of their decent record.

The team might make a few changes as we head to the final stage of the tournament.

The inconsistency of the team has led them down despite having a good squad in the tournament.

Hurricanes are currently at the 5th spot of the tournament and a win here can take them to the fourth spot but again, they will be praying for the results of their rivals too to qualify.

The team will be going in with the same line-up from their previous match.

D’Arcy Short: He is having a decent tournament so far and we can expect him to contribute with both bat and ball.

Matthew Wade: He was the star performer for the Hurricanes in the last contest. He made 44-ball 86 while opening the batting for his team.

Ben McDermott- He is one of the leading run-scorers in the tournament currently and can contribute with quick cameos here as well.

Sam Harper- He is the leading run-scorer for his team at the moment and a lot depends on him with the bat here.

He is currently in good form and is one of the leading run-scorer for his team. Marsh once again will hold the key when it comes to the batting here.

Harvey will be keen to play the finisher role in this contest. Though he is not consistent, one just cannot ignore him here.

He will be keen to lead his team from the front and will be looking to finish the tournament on a high.

He is one of the leading wicket-taker of the team and can be very crucial in this contest for Hurricanes.

The world’s number one batter Dawid Malan isn’t at his best at the moment but we can expect him to score a few runs at least here.

Tim David has been one of the consistent performers for his team and he will be holding the key in the middle-order here.

Here is the Dream 11 Team prediction for REN vs HUR. We are going with players who are currently in good form and can win the match with ease.

Head To Head Team For Melbourne Renegades vs Hobart Hurricanes

Who Will Win Today Between REN vs STA Dream11 Prediction, 55th match?

According to Kheltalk’s astrology REN vs HUR Dream11 match Prediction, HUR will win the match.

According to Kheltalk’s REN vs HUR Dream11 toss prediction, HUR will win the toss and ask REN to bat first.