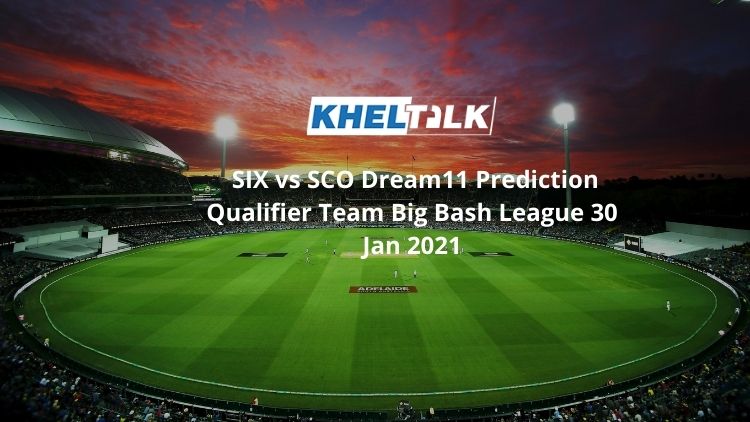 According to SIX vs SCO Dream11 Prediction for Today’s Match Fantasy Cricket, Sydney Sixers will take on Perth Scorchers in the Qualifier of the Big Bash League, 2020-21 on Saturday, 30 January 2021, at the Manuka Oval, Canberra. Keep reading to find out about the Big Bash League, 2020-21 Qualifier SIX vs SCO Dream11 team today.

Here are the stats for the teams SIX vs SCO:-

The pitch of Manuka Oval offers assistance to the batsmen. However, there will be something for the pacers as well and the initial session of the match will be crucial. Once the batsmen get through that, we can witness a free flow of runs.

Unfortunately, the weather is not looking great at Canberra as we will be having rain interruptions. Hopefully, that doesn’t kill the whole game.

The temperature is expected to be 27-degree Celsius and the humidity to be 66%.

Since rain is on cards, it is good to go with the players from the chasing teams more. It is good to have more batsmen at this venue because of the scoring. We can expect something around 170 here.

Sixers are the best team at the moment and they have managed to end the league stages with 9 wins.

Sydney Sixers will be hopeful of pulling off a win here because of the previous results. The team is in good touch currently and we can expect them to do well here.

The team is likely to go ahead with the same playing XI from the previous match.

Perth Scorchers are having a great run currently having won recent five matches. After a series of losses, the team is doing well currently and they will be looking to continue their dominance.

Scorchers went down to Brisbane Heat in their last contest and had ended up at the 2nd position in the table. A win there would have helped them to top the table. Nevertheless, the team will be looking to bounce back after a loss in the previous game.

The team will be going in with the same line-up that went down against the Heat.

Moises Henriques- The skipper is back into the team and is doing an excellent job both with bat and ball.

Josh Phillipe- He is currently one of the leading run-scorers of the tournament, undoubtedly, the best pick for the captain.

Jhye Richardson- With 27 wickets to his name, Richardson is having a dream run here and is the main man for Scorchers here.

Dan Christian- He can contribute both with bat and ball. With an excellent strike-rate, Christian will be the key player in this contest.

He is the leading run-scorer for the Scorchers at the moment and he has a strike-rate close to 130.

He has been excellent with the gloves and will be eager to contribute with the bat as well.

Marsh is having a good tournament and has done well in recent times. He can also contribute to the ball which is an added advantage.

Brathwaite is yet to contribute with the bat but is one of the main bowlers for the team in this tournament.

He has an economy rate lesser than 8 and is certainly the best pick among the bowlers.

Here is the Dream 11 Team prediction for SIX vs SCO. We are going with players who are currently in good form and can win the match with ease.

Head To Head Team For Sydney Sixers vs Perth Scorchers

Who Will Win Today Between SIX vs SCO Dream11 Prediction, Qualifier?

According to Kheltalk’s astrology SIX vs SCO Dream11 match Prediction, SCO will win the match.

According to Kheltalk’s SIX vs SCO Dream11 toss prediction, SCO will win the toss and ask SIX to bat first.