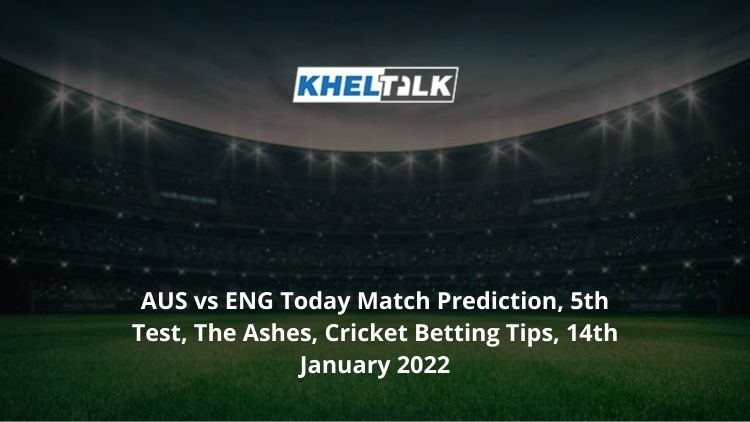 KhelTalk is the only destination that brings you the finest today’s match prediction that you can trust. We are here for AUS vs ENG, Today Match Prediction, 5th Test of The Ashes, Online Cricket Betting Tips, which will provide every user with a clear picture of which team and in what aspect they can place their bets.

The fifth and final match of the Ashes will be a Day/Night Pink Ball Test and Bellerive Oval in Hobart will host this fixture. Australia is currently leading the series 3-0 with a batting lineup that is in great form at the moment. The hosts have completely dominated England in the previous matches however, the English team saved themselves from another loss by defending well in the last few overs and the match resulted in a draw.

Their skipper, Pat Cummins has confirmed that Usman Khawaja, who struck two centuries in the last game, will replace Marcus Harris as the opener while Travis Head will be back at number 5. If Scott Boland is fit then Australia is likely to go in with the same bowling lineup. If not, then Jhye Richardson could replace Boland. Josh Hazlewood has also been ruled out of the fifth test.

England has a lot to ponder about after they saved themselves from a humiliating defeat in the last match. Their performance has been disappointing in the series so far and the changes to their side have also not made any difference for them. It will be a hard job for England to secure a victory in the final Test considering the bad form of their key players like Root and Malan who failed to convert it into Double Digits.

It will be upon Bairstow and the fast bowlers to help the England team to put up a fight against the in-form Australian team. Haseeb Hameed has looked out of sorts and could make way for Rory Burns. Sam Billings will replace Jos Buttler who has been ruled out due to a finger injury. Ollie Pope could come in place of Jonny Bairstow while Ben Stokes could make way for Chris Woakes.

The bowling lineup is likely to remain the same for this test with both Stuart Broad and James Anderson in the playing eleven and it would be heavy responsibility on their shoulders to calm down the Australian batters.

The weather will remain cloudy throughout the course of this match while humidity will be on the rise. There are some chances of rain as well on the second day. The temperature will hover around 15-22 °C

The wicket will be batting-friendly with a little help for the pace bowlers who like to hit the deck. The surface at Bellerive Oval has an equal amount of assistance for both batter and bowlers. Pacers can be effective with the new ball while spinners can provide breakthroughs in the middle overs.

AUS vs ENG, Who will win the match, Today Match Prediction

Australia is expected to win against England.

With three wins to back them up, Australia is expected to come on top of England in the last test of Ashes. They seem to have found the right balance between both their departments that have performed exceptionally well in the series so far.

On the other hand, England will bank upon the likes of Joe Root, Dawid Malan, Jonny Bairstow to put up big scores on the board. The toss will also play a major role here as this is a Day-Night Test Match with the pink ball expected to move around a lot more than the red ball under the lights.

In their previous encounter in this series, Khawaja was the Man of the Match after scoring two consecutive centuries (137-1st innings, 101- 2nd innings). He is an absolute run machine in the longer format and will play a crucial role in the fifth Test as well. After replacing Travis Head in the middle order in the fourth Test, he proved to be beneficial at the SCG. Now that he is set to open the batting order after replacing Marcus Harris he will have more time to provide a good start to the Australian innings.

Root started the series on a very good note as we saw a well-balanced inning (89 off165) from him in the first test but his performance has faded away as the series progressed. In four matches he has amassed 277 Runs with an average of 34. Now that England’s pride is at stake he is expected to return to his natural form as he has always been consistent in past in the Test format. He is the highest Test run-scorer past year and cannot be taken lightly.

Mitchell Starc has been brilliant with the ball in the series, currently topping the wicket-taking charts alongside Lyon with 15 wickets in four matches. While the left arm managed a single scalp in the last test, he provided fair amount of contribution with the willow. Given how England’s batting unit has fared, Starc should pick up a few wickets in this game as well.

After being excluded in two matches from the squad Broad has gained his wicket-taking rhythm at the right moment. He took a fifer at the SCG in the first innings while saving the match alongside Anderson in the second innings. He showed utmost grit while batting and will play a vital role in the final Test as well. So far he has picked 7 wickets in 2 matches. He always had the hunger to perform and when given the place in the squad he has proved his worth. He is certainly a player you can place your bets upon.