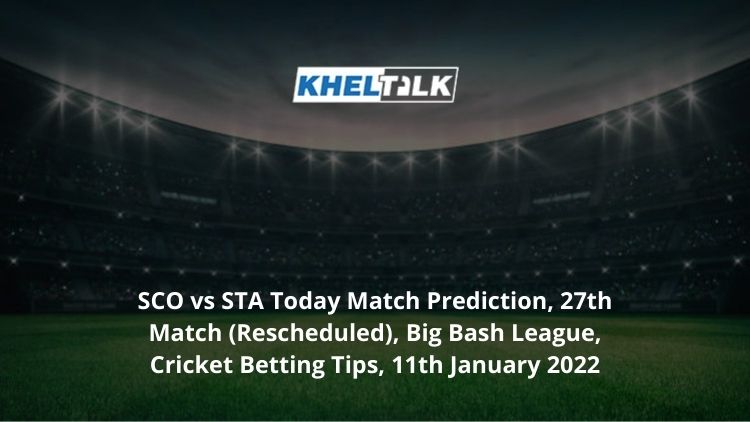 KhelTalk is the only destination that brings you the finest today’s match prediction that you can trust. We are here for SCO vs STA, Today Match Prediction, Big Bash League, Online Cricket Betting Tips, which will provide every user with a clear picture of which team and in what aspect they can place their bets.

Perth Scorchers will lock horns with Melbourne Stars in the Rescheduled 27th Match of the Big Bash League 2021 as Simonds Stadium in Geelong will host this fixture. Scorchers have had an exceptional run in the tournament so far and are currently sitting on the top of the points table with 33 points with a healthy run rate of +1.028. They have won nine of eleven games they have played so far and are currently in lethal form in the tournament.

They faced Sydney Sixers in their last game which they won by 5 wickets. After electing to bat first the Sixers posted a target of 151 Runs on board. Aston Agar took two scalps while their lead bowler Andrew Tye remained wicketless.

In return, Ashton Turner played a captain’s knock of 69 Runs as the top order got out without scoring much. Aaron Hardie also supported the skipper with his 35 Runs off 31 balls as the Scorchers successfully chased down the target in 19 overs. The Scorchers have been the most consistent team in the tournament so far and will be looking to bank upon the same in this contest as well.

On the other hand, The Stars have blown hot and cold this season of BBL. They are currently placed at the bottom of the table with three wins and five losses while their last match got postponed owing to the Covid pandemic. They played their last match against Melbourne Renegades which they lost by 5 wickets.

After electing to bat first the Stars posted a target of 126 Runs while losing all of their wickets to Renegades’ bowling attack. Opening the batting Travis Dean scored 32 Runs while Cartwright amassed 41 Runs in 29 balls. In return, the Renegades successfully completed the chase in 18 overs as Aaron Finch scored a half-century for his side.

The Stars have been constantly struggling with their batting order failing to deliver and we have witnessed a frequent collapse of their top-order in the past fixtures. They have potential batters with the likes of their skipper, Glen Maxwell and Hilton Cartwright but are failing to perform on any given day which is costing them the match.

The weather will be cloudy throughout the day. The temperature will be around 18-26 degrees Celcius during the contest and there is a slight chance for rain.

The pitch at Geelong is going to be a high-scoring game as the batters will have the upper hand here. One can expect both teams to go for chasing as the pitch will not change much during the course of the game. The average first innings score at this venue is close to 150.

SCO vs STA, Who will win the match, Today Match Prediction

Perth Scorchers is expected to win against Melbourne Stars.

It has been a dream run for the Scorchers so far as they have emerged on top of every team they met in the tournament so far. With the likes of Colin Munro and Bancroft in form, their batting unit can chase or post-high totals on the board on any given day. However, after losing their last match to Thunder they will be looking to carry on the same winning momentum in this fixture as well.

On the other hand, the Stars batting lineup was completely annihilated by the Renegades bowling attack in their last fixture. Both teams are a strong side on paper but when it comes to execution on match day the Stars have had an unfortunate run in their past fixtures.

Munro has earned a reputation as one of Scorchers’ most reliable big hitters. He is currently the highest run-getter for Scorchers and has scored 353 Runs in 10 matches including a massive high score of 114* Runs in the last match against Strikers. While his unbeaten knock of 64 Runs in the last match against the Thunder went in vain but a player of such caliber certainly can’t be missed.

As a top-order batter, his abilities continue to rise after putting together a number of superb seasons. Cartwright has become a vital member of the Stars team as currently, he is leading the tally for most runs for Stars scoring 256 Runs in 8 games. His recent knock of 41 Runs against the Renegades helped his team reach a respectable total and is a player that can prove to be a fruitful pick for this contest.

Andrew Tye’s performance was disappointing in the last match against the Sixers where he failed to conceive aby wicket while leaking too many runs in his four overs. But the fact cannot be neglected, that he is currently the leading wicket-taker this season. He will surely make a comeback with his magical spell in this contest and could prove to be a fruitful pick for good returns.

He has the speed and ability to light up the track for the Stars. The All-Rounder is capable of pinch-hitting as well as his blistering bowling pace to give nightmares to opposing batters. He is currently the leading wicket-taker for the Stars with 11 wickets in 8 matches. While Couch failed to conceive a single scalp in the last match against Renegades he is a player with exceptional skills that could make a comeback with the ball in this contest.