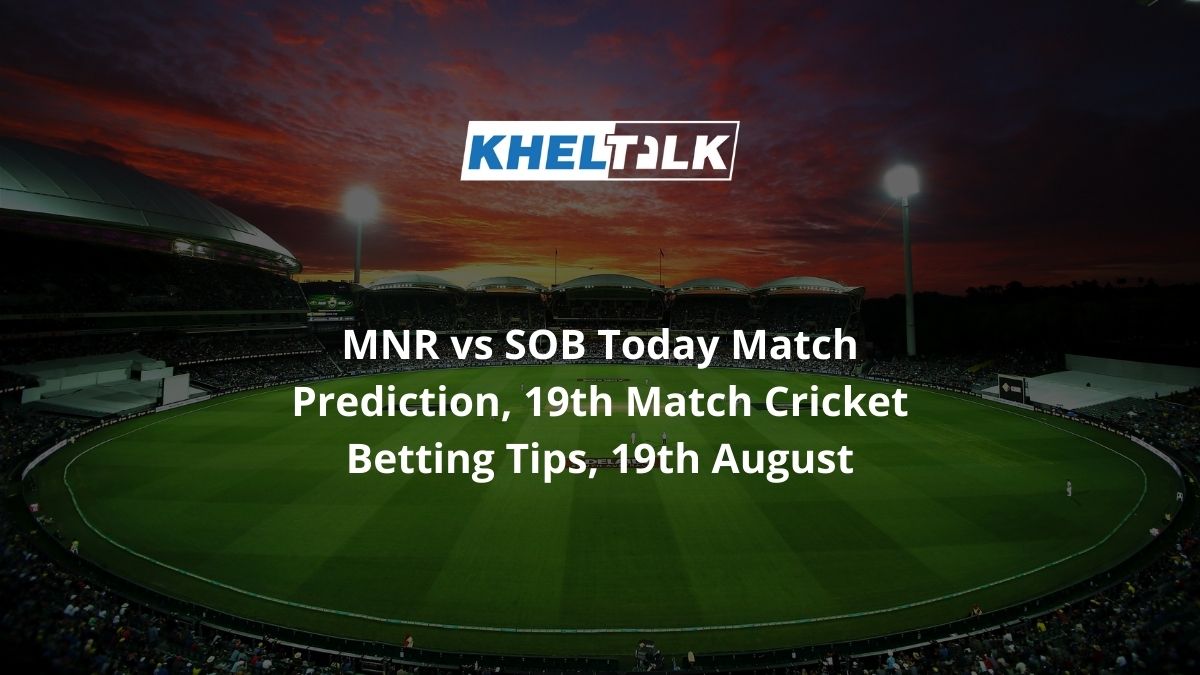 KhelTalk is the only destination that brings you the finest today’s match prediction that you can trust. We are here for MNR vs. SOB Today Match Prediction, 19th Match, The Hundred Men Online Cricket Betting Tips, which will provide every user with a clear picture of which team and in what aspect they can place their bets.

Manchester Originals so far had a good first half of the tournament. They are comfortably sitting in the second spot right now. They will be missing their captain and star player Jos Buttler due to international commitments but in the last match without him, they amazed everyone with a thundering performance. They will now lock horns with Southern Brave, who is also in good form.

The biggest concern for Manchester Originals before the start of the tournament was to find the best eleven. After losing the 1st match, they seemed to have cracked the code. Joe Clarke opened the innings in the last match after Buttler’s unavailability and he didn’t disappoint everyone and scored a splendid 58 including 4 huge sixes. The tournament has now reached the halfway point and momentum is the key going forward and Manchester Originals can’t afford to lose it now.

Southern Brave has made a tremendous comeback in the tournament after losing their first two matches. They have been more ruthless with their approach and plans have worked in their favor. Many experts wrote them off after early struggles but they are now one of the hot picks of the tournament. They still are at the 7th spot because of the negative run rate but the table can quickly change if they continue their hot form.

Southern Brave always looked good on paper but now they are translating on the field as well. Quinton de Kock is due to fire in the tournament and if starts scoring runs then this team will be unstoppable in the second half of the tournament. Bowling was their main concern but experienced players like Chris Jordan and Tymal Mills have steadied the ship for them so far in death overs. They are now in much better space and can easily outdo this Manchester Originals side if they play to their potential.

The Weather can become a barrier in this match. Rain is again expected during the time of the match. So far in the tournament, rain has, again and again, spoiled the moods of fans and especially in the at Manchester, the last match was washed out due to rain and again rain is expected.

Manchester pitch has been under the scanner for its slowish behavior in this tournament. In the last match, Birmingham Phoenix was bundled out for just 87 runs and while chasing Manchester Originals had to face many tough challenges. We can again expect the same kind of pitch but weather might affect conditions as well. Seamers might get help early on. It will be interesting what captains will choose after winning the toss.

MNR vs SOB– Who will win the match, Today Match Prediction:

Manchester Originals expected to win the match against Southern Brave

James Vince is the captain of the Southern Brave side and so far has been leading from the front. Vince had a good 2021 so far, he was 3rd highest run-scorer in BBL and recently scored his maiden ODI century against Pakistan. He had continued his form in this tournament as well. He has scored 109 runs so far and has been carrying the team alone due to the struggles of his players lie de Kock so far in the tournament. He has looked good recently and will give you good returns. He is our pick for the best batsman.

Joe Clarke in the last match showcased why he is considered the future of England cricket. He smashed swashbuckling 58 runs and announced himself in this tournament. After Jos Buttler has left the tournament, he is batting at his favorite opening spot. He is very destructive early in the innings and can be Manchester’s counter for Southern spinners. He is our pick for best batsman from Manchester Originals.

Chris Jordan is an established white-ball bowler. He bowls the most crucial overs for his teams. Southern Brave was struggling in death overs at the start of the tournament and Chris Jordan has risen to the occasion in the last couple of matches. The Southern Brave bowling lineup is weak, and they depend on him very much. They are back in the tournament with the last couple of matches and need to continue this form and for that Chris, Jordan will be key to their mission. He is our pick for best bowler from Southern Brave

Matthew Parkinson will be one to watch out for in this match. Parkinson used Old Trafford’s slow pitch to perfection in the match against Birmingham Phoenix. He had a good series against Pakistan and has carried his form to The Hundred. Matthew Parkinson was a Man of the match for his spell of 4 wickets, and again on the same Old Trafford surface, and he can trouble the Southern lineup with his sharp googlies. He is our pick for the best bowler.