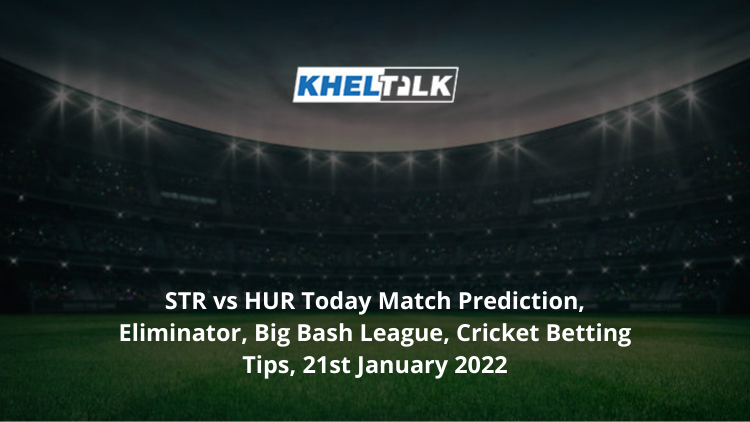 KhelTalk is the only destination that brings you the finest today match-winner prediction that you can trust. We are here for STR vs HUR, Today Match Prediction, Big Bash League 2021-22, Online Cricket Betting Tips, which will provide every user with a clear picture of which team and in what aspect they can place their bets.

Adelaide Strikers will lock horn with Hobart Hurricanes in the eliminator match of the Big Bash League 2022 as Melbourne Cricket Ground in Melbourne will host this fixture. The Strikers have made an epic comeback winning four of their matches in a row to make it into the knockout stage of the Big Bash.

They faced Sydney Sixers in their last game and defeated them by a margin of eight wickets. After electing to bat first, Sixers posted a target of 161 runs by the end of 20 overs. In return, a half-century from Matt Renshaw and an unbeaten quickfire of 71* off 42 from Ian Cockbain helped the Strikers seal the win.

Siddle and Fawad Ahmed are key bowlers to look out for in this contest as they accounted for five scalps in the lat match collectively. They still have a chance to make it into the finals, but they need to work upon their batting unit.

Hurricanes had a bit of a shaky start to their campaign but are now back on the winning track after a win against Melbourne Renegade in their last game. They are currently placed at the fifth spot in the points table with 27 points. They have seven wins and an equal number of losses to their tally so far in the tournament.

They faced Melbourne Stars in their last game where history was created by Melbourne Stars as Maxwell blasted 154 off 64 from the willow taking Stars to a record high total of 273 Runs. In return, Ben McDermott remained the highest contributor for Hurricanes scoring a half-century and they lost the match by 106 Runs.

MCG is a neutral surface with equal assistance for both batters and bowlers. The batters need to choose their shots wisely at first and can play freely once they are set. The average first innings score on this wicket is 158. Winning the toss and bowling first will be a good option for the skippers.

STR vs HUR, Who will win the match, Today Match Prediction

Adelaide Strikers is expected to win this match against Hobart Hurricanes.

The Strikers are favorites to win their next BBL game given the current form they are in the tournament while the Hobart Hurricanes haven’t played with a full-strength team and their bowling hasn’t looked very convincing. Strikers are coming into this game after some stunning performances from their key top-order batters Matt Renshaw and Ian Cockbain.

On the other hand, the Hurricanes are struggling with their bowling department as they are leaking way too many runs which we witnessed in the last match against Melbourne Stars. They have potential batters with the likes of Caleb Jewell and Matthew Wade but the collective effort while putting runs on board seems to be missing which is proving to be a turning point for them.

Having played just three games so far for the Strikers, Cockbain has shown immense potential batting at the top order. His unbeaten knock of 71* against Sixers helped Strikers seal the win. He is in influential form with the bat and will be a good pick to place your bets upon. He has amassed 123 runs in three games with a strike rate close to 148.

Matthew Wade is currently one of the top scorers for his team with 318 Runs in 12 matches. He played a captain’s knock in the last fixture against Thunder hammering 83 Runs in 54 deliveries to provide a good platform for the Hurricanes. After a series of low scores in the past few matches, he is expected to be gaining his natural form as he has always contributed in the past in big matches.

The skipper of Adelaide Strikers has given many big breakthrough performances this season and is the leading wicket-taker in the tournament. Siddle has picked 23 wickets in 14 games which includes the best figure of 5/23. Siddle has reinvented himself as a unique T20 bowler in recent years, using his accuracy and changes in length and pace to deceive the best batters so far. He is a safe pick here to place your bets upon as he is expected to bag a scalp or two in this contest as well.

Rogers appears at his prime to take it to the next level again in this edition. He is currently the leading wicket-taker for Hurricanes with 18 wickets in 12 games and can prove to be a handy batter down the order as well. Rogers proved beneficial in the last encounter between the two teams as he finished bagging three wickets 3/24. While he gave away plenty of runs in his four overs in a game against Sydney Thunder, he is set to make a comeback in this one.