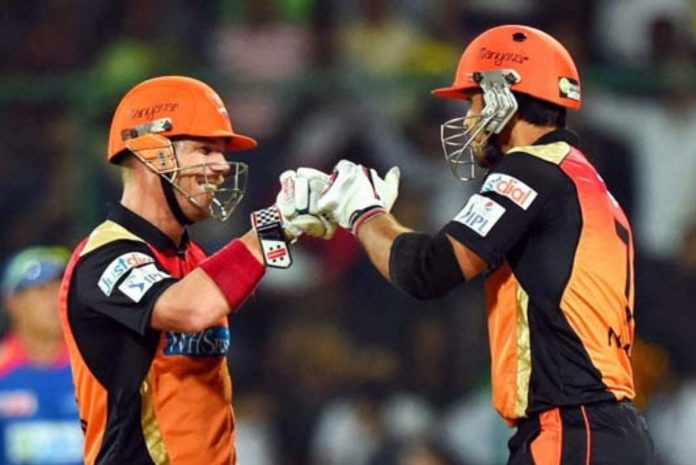 Cricket is a game of partnerships and in T20 cricket, partnerships, in particular, are key to success. In 14 IPL seasons so far, we have witnessed many great batting partnerships. Whether in the early years of IPL, it was Murali Vijay and Michael Hussey from Chennai Super Kings or Chris Gayle and Virat Kohli from Royal Challengers Bangalore, all have some glorious partnerships under their name.

As IPL progressed, we witnessed new partnerships and new milestones in the form of David-Dhawan of Sunrisers Hyderabad and the brotherhood of De Villiers and Virat Kohli of RCB who reached new milestones. Currently, we are set to enter the 15th season and new partnerships will come to fashion but in this article, we will take you through the Top 5 Highest Partnerships in IPL till now.

In 2012, David Warner was playing for Delhi Daredevils under Virender Sehwag’s captaincy and while chasing 188 on a slow Hyderabad track, Delhi lost their captain Virender Sehwag. Naman Ojha came to the crease and formed a formidable partnership with David Warner.

Now then came Virat Kohli at number 3 and stitched a strong partnership with Chris Gayle. Both added unbeaten 204 for the second wicket with help of Chris Gayle’s 128 runs hammering and Virat Kohli’s well supported 73 runs off 53 balls to take Royal Challengers Bangalore to a total of 215 runs.

In 2011, Kings XI Punjab bought Adam Gilchrist with huge expectations and made him captain in search of their maiden silverware. However, Adam Gilchrist couldn’t help Punjab win their first title but gave them many unforgettable memories. One of them came in 2011 with his countryman Shaun Marsh against Royal Challengers Bangalore.

After being put in to bat first Kings XI Punjab lost their first wicket very early and the Australian duo of Marsh and Gilchrist took the charge and took Bangalore into remand. The duo added 206 runs for the 2nd wicket which saw Adam Gilchrist smoking his IPL century with 106 runs off 55 runs.

Shaun Marsh also scored 79 runs off 49 balls and helped the team reach 232 runs. In reply, Royal Challengers Bangalore got bamboozled by the mammoth total and lost by 111 runs margin. Adam Gilchrist won the Man of the Match award for his captain’s innings.

On a hot evening of Wankhede, Royal Challengers Bangalore started the proceedings with the bat but lost Universe Boss early and things looked bleak at that time. But Mr.360 degree maniac and King Kohli took the charge and smashed Mumbai bowlers all over the park. Even the great Lasith Malinga couldn’t do much in front of both champions.

Both added 215 for 2nd wicket with help of AB de Villiers innings of 133 runs off 59 balls. He smoked a record 19 fours and 4 sixes. Virat Kohli also played second fiddle role and scored 82 runs off 52 balls to take Royal Challengers Bangalore to 235 runs. In reply, Mumbai couldn’t get going and only managed to score 196 runs.

In this list, one name which has been common many times has been of Virat Kohli and at number one also, he comes with his brother from another mother AB de Villiers. The dynamic duo will not be seen anymore together but already has given many remarkable moments to their huge fan bases and one of the biggest came in 2016 against Gujarat Lions.

It was a hot evening match in Bengaluru and Royal Challengers Bangalore were asked to bat first. Bangalore lost Chris Gayle early and then South African legend came to the crease. They both initially steadied the ship and batted in one gear till 10th over. But after the 10th was over, they entered a mode of destruction and started taking Gujarat Lions bowlers to destruction.

Both legends completed centuries and added 229 runs for the 2nd wicket. With help of big scores, Royal Challengers Bangalore reached mammoth 248 runs which is the 2nd second-highest total in the history of IPL as well. In reply, Gujarat Lions went down easily and lost by a big 130 runs margin.