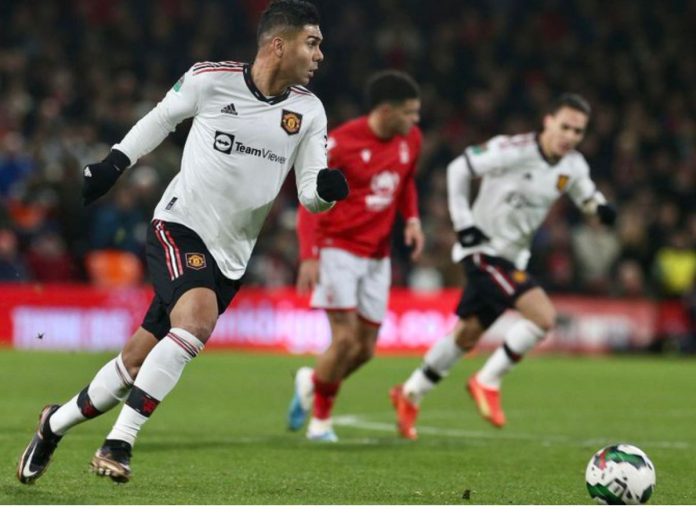 Manchester United put one foot in the finals of the Carabao Cup as they romped Nottingham Forest 3-0. It was a show of absolute dominance as the Red Devils activated their beast mode at the City Ground in Nottinghamshire.

Marcus Rashford, Wout Weghorst and Bruno Fernandes found their names on the goal-scoring sheet as Manchester United aced the leg 1 of the semi-finals of the Carabao Cup. It was a complete team effort from Manchester United.

Marcus Rashford scored the opening goal in the 5th minute itself and drew first blood for the away team. He put on a solo effort as he dribbled the ball from the halfway mark in the left flank. The English striker got the better off a few defenders and then fired the goal in the left corner. It was a stupendous goal from the man in form!

Though Nottingham Forest had a few opportunities to score a goal in the 1st half, they could not seize onto them. Wout Weghorst had a memorable night as he scored for the first time in Manchester United colours.

At the brink of the half-time, Antony fired a fiery ball into the goal but it was saved by the custodian of Nottingham Forest. The deflection came right in the path of Weghorst who was lurking. He made absolutely no mistake and scored the 2nd goal for Manchester United.

Manchester United continued their good form in the 2nd half

With a 2-0 lead, the momentum was right with Erik Ten Hag’s men. They had absorbed the pressure with ease and were playing a dominant brand of football. In the dying minutes of the game, Bruno Fernandes scored the final goal and it was the final nail in the coffin of Forest.

Steve Cooper’s side will have to make sure that they win the game with a fabulous performance. The stakes will be quite high and they will have to punch above their weight in front of a dominant-looking Manchester United.