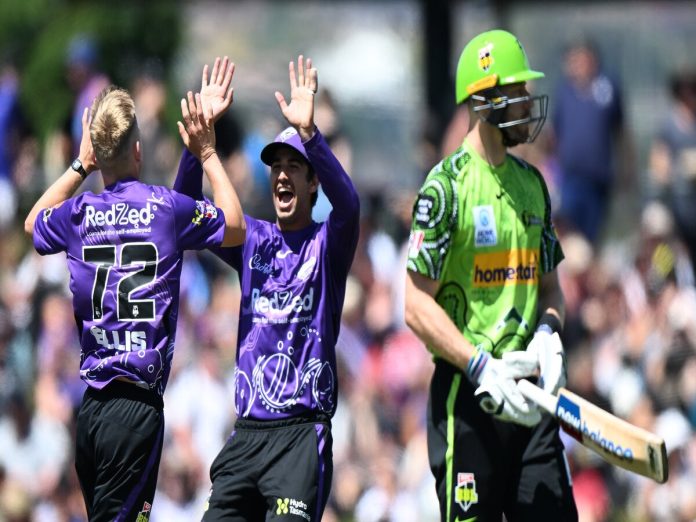 At the Bellerive Oval in Hobart, Nathan Ellis claimed a hat-trick before Tim David led the Hobart Hurricanes to a crucial five-wicket victory over the slumping Sydney Thunder.

Thunder never recovered from David Warner’s dismissal for a duck in the first over after opting to bat in sunny conditions. Quicks Ellis and Riley Meredith shared six wickets while developing left-arm wrist spinner Patrick Dooley took three to restrict Thunder to 135.

The Hurricanes had some nerve-racking moments in their chase, with David hammering 76 off 41 balls and finishing the game in the 17th over with his sixth six. As a result, the Hurricanes overtook the Thunder, who had lost three consecutive games, to take the fifth position.

Ellis came back in the 15th over and destroyed Ollie Davies’ fighting innings. He bowled Nathan McAndrew on the next delivery to complete his hat-trick, having earlier dismissed Matthew Gilkes to close the fourth over.

The Hurricanes’ chase began nervously, and they fell to 20 for 3 in the third over. Wade was saved on three points when Davies missed an excellent chance at point off McAndrew.

Wade, who had missed a match owing to personal reasons, then hit a boundary on the next ball and teamed with David in a scorching 79-run partnership that belied the Hurricanes’ precarious position.

David began slowly before putting his foot down in the eighth over with a six-off Cutting on the leg side. David set the Hurricanes’ chase on track in a couple of deliveries, including successive sixes off spinner Usman Qadir. He achieved his second BBL half-century and held his nerve despite a late wobble to help the Hurricanes maintain their unblemished home record.