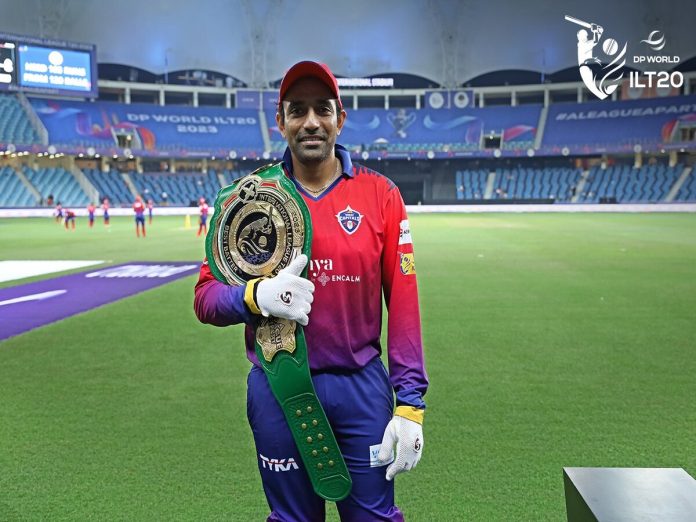 The ongoing ILT20, the top domestic T20 league in the United Arab Emirates (UAE), has introduced five sets of belts as a unique way to recognize and motivate players for their efforts in three departments with each passing match.

In an effort to keep fans talking and players setting higher goals, the Green and White Belts will be given from player to player as and when the cricketers top the rankings for the most runs scored and wickets taken, respectively, during the season.

After a grand opening ceremony on Friday at the Dubai International Cricket Stadium, the competition got underway. The players are experiencing a variety of new innovations, such as the usage of fan-engaging Smart ball technology on the field, and they are also winning a unique set of prizes.

Belts in ILT20 League in UAE:

The White Belt will also be passed from one bowler to another at the conclusion of an inning, just like the Green Belt. A bowler will be awarded the White Belt whenever he exceeds the other to become the competition’s top run-getter.

Since only the league stage is taking place at this point in the competition, the Black Belt is not relevant. The owner of the team that wins the ILT20 competition—i.e., the team that lifts up the coveted cup in the finals of the first ILT20—will get the famed Black Belt. This Belt will only be given out at the tournament’s awards presentation.

In acknowledgment of his constantly fruitful efforts throughout the competition, the league’s most valuable player will also be honored and presented with the magnificent Red Belt during the presentation ceremony at the league’s conclusion.

The Blue Belt, which will be given to the best UAE player at the end of the season, will be up for grabs among the 24 players who were personally chosen to represent the country in the league.