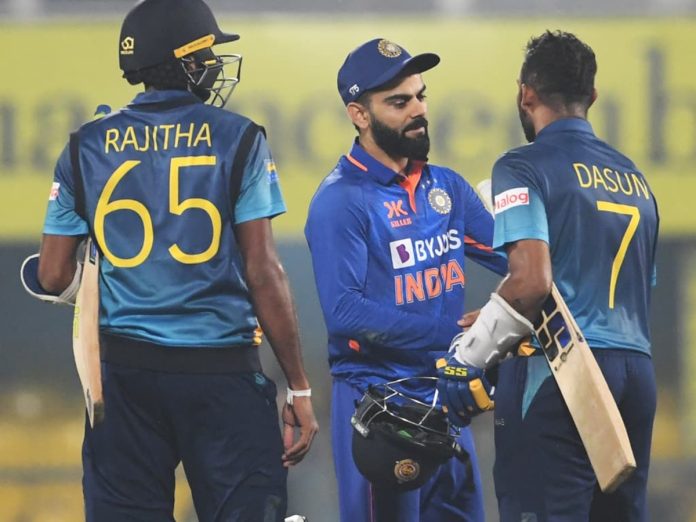 The stage is set for the second One-Day International between India and Sri Lanka on January 12 after India’s outstanding performance in the first ODI between the two teams on January 10 in Guwahati. Eden Gardens in Kolkata will serve as the game’s venue.

India will try to grab an unbeatable 2-0 lead against Sri Lanka in the second One-Day International at Eden Gardens in Kolkata on Thursday, buoyed by the performance of its top three hitters.

Virat Kohli hasn’t looked back since he broke his nearly three-year century drought in a T20I match against Afghanistan, especially in the white ball format, as he reached his 73rd international century in their 67-run victory in Guwahati on Tuesday.

On January 12, a Thursday, India and Sri Lanka will play their second one-day international. The game will take place at Kolkata’s Eden Gardens stadium. The toss will occur at 1:00 PM IST, and the match will begin at 1:30 PM IST.

Where can we watch the live streaming of India vs Sri Lanka’s 2nd ODI on TV?

The second One-Day International between India and Sri Lanka will be streamed live on Star Sports Network.

Where can we watch the live streaming of India vs Sri Lanka’s 2nd ODI online?

The second One-Day International between India and Sri Lanka will be streamed live on the Disney+ Hotstar app.

IND VS SL 2nd ODI: 3 Players To Watch Out For

Yuzvendra Chahal has a track record of success playing for India in white-ball tournaments. He has played in 71 ODIs, taking 119 wickets at an average of 5.26. Chahal is one of the key players who must be watched; he can be a threat to the opposition.

One of the best batters to come out of Indian cricket is Rohit Sharma. With his prowling bat and flood of runs, he has destroyed bowling attacks. After recovering from an injury, Indian captain Rohit Sharma allayed any doubts about his level of match fitness by taking on the Lankan attack and scoring 83 runs off 67 balls to create the groundwork for a huge total. Before entering his preferred location, Eden Gardens, he appeared to be in the zone.

Dasun Shanaka, the Lankan captain, performed admirably during this tour. He scored the most runs for his team during the T20I series, and he is off to an unbeaten start in the ODI series. One to watch out for is Shanaka. He racked up 1054 runs over 42 innings.