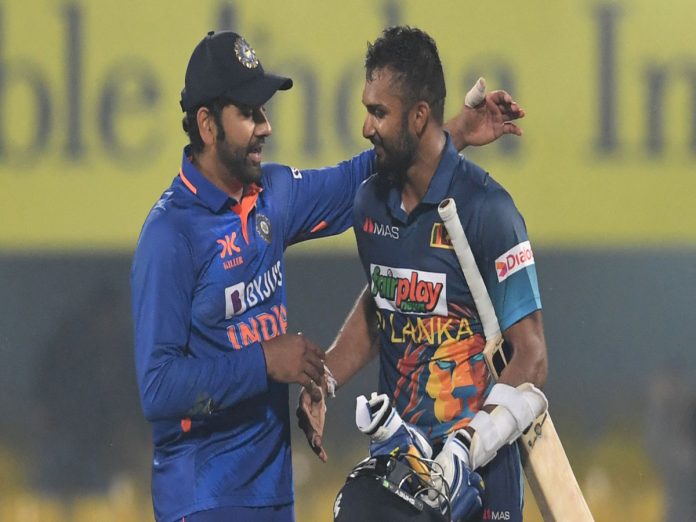 According to Chris Silverwood, head coach of Sri Lanka, Dasun Shanaka’s undefeated 88-ball 108 will put him back in the “IPL marketplace.”

At the IPL mini-auction in December, all-rounders brought in the highest salaries, with England’s Sam Curran going for the highest price. Why Sri Lankan skipper Dasun Shanaka wasn’t bought was a mystery.

The franchises must have had some second thoughts after watching Shanaka put on an outstanding performance during the last T20I series between India and Sri Lanka because the all-rounder had fixed his base price at merely Rs 50 lakh.

Shanaka, batting at No. 6, offered Sri Lanka a small ray of hope with his counter-attacking innings as they managed 306 for 8 to accept a 67-run loss on Tuesday despite being reduced to 179 for 7 in their pursuit of a massive 374.

Shanaka scored his second ODI century, continuing his strong play from the T20I series, where he led his team in runs scored with 124 at a strike rate of 187.87.

Shanaka’s unbeaten knock will put him back in the IPL

After his outstanding runs against India in the Guwahati ODI on Tuesday, Dasun Shanaka, the skipper of Sri Lanka, has the support of his head coach Chris Silverwood to land an IPL contract. Shanaka’s undefeated 88-ball 108, in Silverwood’s opinion, will help him re-enter the IPL market.

“I think he (Shanaka) has done himself a world of good,” Silverwood said during a media interaction after the first ODI.

“He has put himself in the marketplace now. I am sure the (IPL) franchises will be looking at him and seeing how dynamic a cricketer he is. He is a great striker of the ball, so hopefully, he will get an opportunity.”

Asked if Sri Lanka were over-reliant on Shanaka, the coach said:

“I don’t think we rely (only) on Dasun. He is in a great vein of form at the moment, so obviously he is shining.

“If you look, we had Pathum (Nissanka) also score runs today. I thought the partnership between him and Dhananjaya (de Silva) gave us some momentum when they were together.” Opener Nissanka made 72 from 80 balls, while Dhananjaya scored 47.

“We have seen over a period of time that each individual at times has put their hands up and been counted. So I am not overly worried about that.

“Obviously, we need them to put their hands up more, especially on very good tracks like this, to put that fight up, to build partnerships. So that’s constant work,” the coach said.