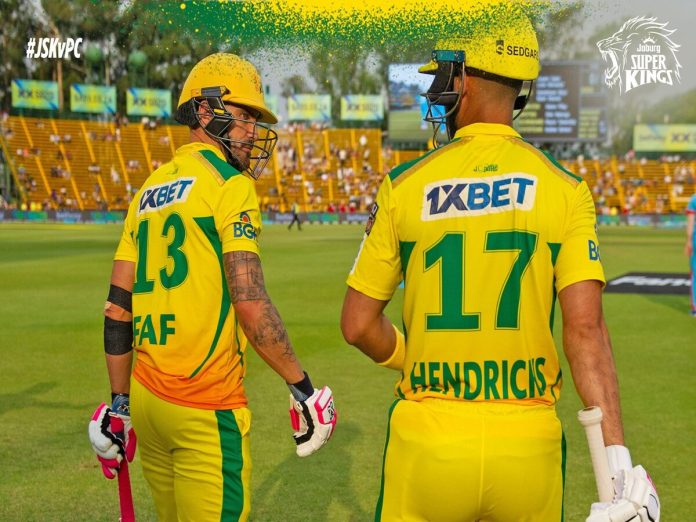 On January 18, the Pretoria Capitals and Joburg Super Kings will square off in Match No. 13 of the SA20 2023. The game will be held at Centurion’s SuperSport Park.

The Capitals, captained by Wayne Parnell, once held the top spot in the points standings after defeating Aiden Markram’s Sunrisers Eastern Cape twice. However, as a result of their six-run loss against the Joburg Super Kings, they slid to third place in the rankings.

As Richard Hendricks and Faf du Plessis played a wicketless powerplay together, JSK’s concerns about their top order were finally eased. The Super Kings scored 168 for the loss of six wickets after being given the opportunity to bat first. Leus de Plooy used seven fours and five sixes to compile an unbeaten 40-ball 75. Before Anrich Nortje dismissed him, Faf du Plessis also made 27 out of 16 before scoring.

Reeza Hendricks made contributions of 45  runs but largely struggled because he couldn’t perform better than a run-a-ball. The Capitals’ best bowler was Ethan Bosch, who picked up three wickets. Nortje, who took two wickets for 26 runs in four overs, was also at the top of his game.

Pretoria Capitals’ batting performance against the Joburg Super Kings was unsatisfactory because the no-hitter was able to go close to or surpass the 30-run threshold. Phil Salt led the way with 29 runs, followed by James Neesham and Shane Dadswell, who each scored 24 and 22 runs. As they are playing at home today, the batters will be looking for a stronger performance in an effort to avenge their previous performance. Joburg Super Kings won by a score of 6 as a result.

PC vs JSK: Where to Watch?

Viacom18 and Sports 18 will broadcast the SA20 league in India. The games will be televised live on TV on Sports18-1, Sports18-1 (HD), and Sports18 Khel. Jio Cinema will also be available online.

Also Read: SA20 League: 5 Players Who Can Set The Stage On Fire