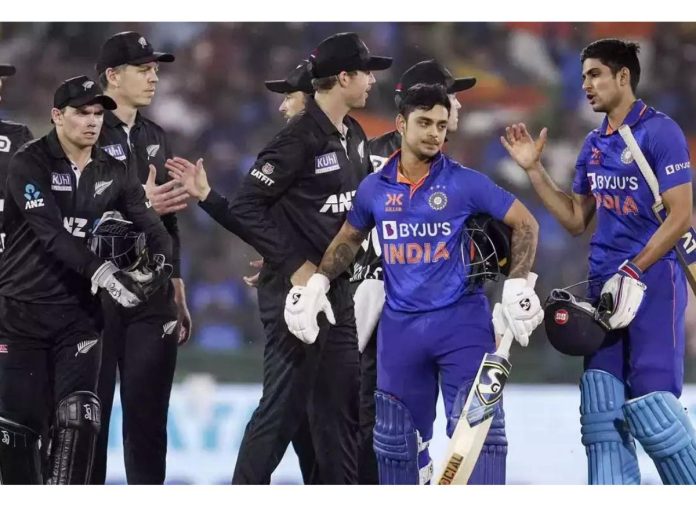 After the successful outing in the ODI series, Team India’s focus shifts to the 3-match T20I series against New Zealand. The likes of Virat Kohli and Rohit Sharma have been rested from the squad and Hardik Pandya will be donning the role of the captain.

The last time the two sides faced in a T20I bilateral series, India won the series 1-0. Rain played spoilsport in two of the three T20Is and the one game that was completed was pocketed by India.

India recently registered a 2-1 victory over Sri Lanka in 2023 in what was their first series assignment in the new year. For New Zealand, their last T20I series was against India and they would be hoping to get the better of their Indian counterparts in this series.

In this article, we take a look at 5 players who are expected to perform in the upcoming T20I series between India and New Zealand:

Hailed by many as the successor of Virat Kohli, Shubman Gill has activated his beast mode in international cricket.

He reposed the faith of skipper Rohit Sharma and played some sensational knocks up-front against New Zealand in the recently-concluded ODI series, where he had also bagged the player of the series award. Gill amassed 360 runs in 3 games and is in blistering form.

Hardik Pandya has momentum on his side as he had a good run in the ODI series against the Kiwis. In the 3rd ODI, he smashed a quick-fire fifty and guided India to a competitive total.

He will be captaining India and is expected to produce some remarkable performances. Pandya’s exploits with the bat as well as with the ball need no introduction at all.

The skipper of New Zealand, all-rounder Mitchell Santner will be pivotal to the chances of New Zealand in this high-octane series against India.

The 30-year-old spin-bowling all-rounder has so far played 80 T20Is for New Zealand and is vastly experienced with different match situations. He has scored 491 runs and has taken 89 wickets in the shortest international format.

An out-an-out fast bowler, Lockie Ferguson will be one of the most exciting players to watch out for. His sheer pace, accuracy with his line and lengths and his ability to cope up with crunch situations make him an indispensable part of the New Zealand cricket team.

He had a fabulous series against New Zealand in ODIs and finished as the leading wicket-taker, with 6 wickets under his belt. Yadav’s performance will be closely watched in this T20I series

Also read: IPL 2023: 3 Reasons Why Will Jacks Can Be a Game Changer for RCB This Year