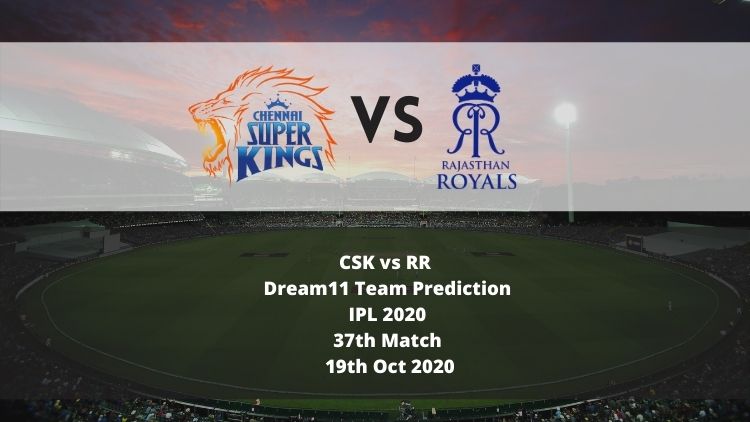 Chennai Super Kings and Rajasthan Royals will come face to face in a crucial IPL 2020 game. The side losing the game will be sent back on the backfoot in their race to qualify into the further stage of the tournament. They suffered defeats in the previous games and will be looking to gain a much-needed momentum in the ongoing crucial week of the tournament. So let’s look at our CSK vs RR Dream11 Team Prediction, Top Captain & Vice-Captain Picks, Head to Head, Grand League, and Fantasy Tips.

Head to Head for CSK vs RR:

The track will certainly go in the favor of bowlers and batsmen will find it difficult to smash the bowlers from the very first ball. The fast-bowlers will get success on the back of variations in their bowling. Anything between 160 and 170 will be easily defendable at this venue.

Jos Buttler came out to bat at number 6 for the Royals in the previous game. And, looking forward to the inconsistency of the players, he is expected to play a key role with the bat. The England wicketkeeper-batsman will be looking to play a fierce knock as per his reputation.

Smith has finally gained his form with the bat. He smashed a swashbuckler knock of 57 runs off 36 balls against RCB. He will be very confident to replicate the same performance against CSK. His main aim would be to win the match for the Royals, who are struggling at the moment.

Ambati Rayudu played a decent knock in the last game for his side. But, ended up on the losing side. However, in this match, he might unleash his beast mode with the bat. He has notched 237 runs until now in IPL 2020.

Shane Watson has been consistently scoring runs for Chennai Super Kings after a poor start to his tournament. He is coming into the game with a decent performance from the previous match. And our experts have backed him to turn the tables for CSK.

CSK vs RR Dream11 Prediction: Who will win the match

Chennai Super Kings and Rajasthan Royals have lost their previous games and they have been dealt with a major blow in their quest to qualify for the playoffs. However, leaving that aside, our experts have reviewed the previous performances of both sides along with their head-to-head records. And, they have concluded that CSK will easily defeat RR in the upcoming contest.