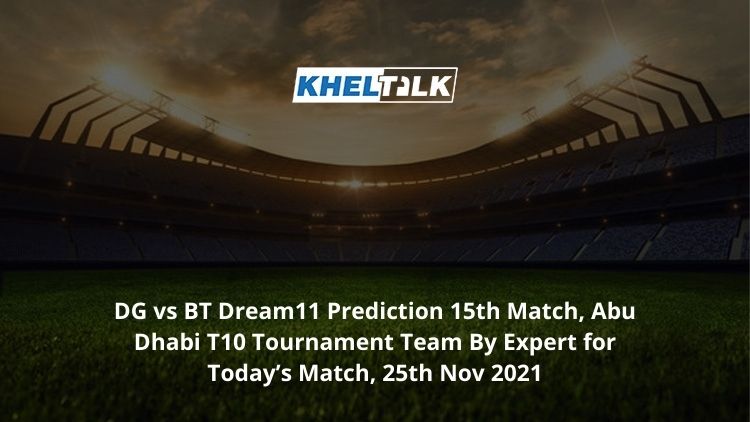 Welcome to DG vs BT Dream11 Prediction for Today’s Match Fantasy Cricket. Deccan Gladiators will take on Bangla Tigers in the 15th match of the Abu Dhabi T10 league. Keep reading to find out about the 25th Match, DG vs BT today

Bangla Tigers and Deccan Gladiators will lock horns in this contest. Gladiators have won three matches and have lost only one so far. They are currently in the second spot, just behind Team Abu Dhabi.

On the other hand, the Tigers have won two and have lost as many from their four matches. They are currently in the fourth spot.

The conditions will favor the batters more and there is a huge chance that this game could be a high-scoring one. Anything below 90 is easy to chase at this venue and most teams have preferred chasing at this venue.

Typical weather awaits us in Abu Dhabi. The temperature will be around 32 degrees Celcius for the whole day. According to the forecast, there is no chance of rain.

The team has vast experience and some of the players have featured in the last edition as well. However, they couldn’t stand up as a team here and are currently in need of a big win.

Gladiators are one of the favorites to win this tournament. They are doing well at the moment and are likely to keep their second spot in the contest. Wanindu Hasaranga will be the player to watch out for once again.

Tom Moores averages 68 in the tournament at the moment. He has 68 runs with the best of unbeaten 47 while striking at 188.88. He has six fours and five sixes to his name.

Wanindu Hasaranga is the leading wicket-taker for the team. He has eight wickets to his name with the best of 4 for 12 while striking at 5.2. He also has scored 34 runs from his only batting innings in the tournament.

Tymal Mills is bowling well at the moment. He has played only two matches but has picked up three wickets. Most importantly, his economy rate is lesser than nine in the tournament.

Will Jacks could be the difference between the two teams here. He has 78 runs from his four outings with the best of unbeaten 57. He strikes at 205.26.

Faf du Plessis is having a poor tournament but is just too good to be missed out. The skipper will look to bounce back in this contest as this is a sort of must-win game for the team.

All-Rounders –,A Russell, W Hasaranga, B Howell, I Udana

Who Will Win Today Between DG vs BT Dream11 Prediction, Today’s match?

According to Kheltalk’s astrology DG vs BT Dream11 match Prediction, Gladiators is likely to win this contest. They won the last head-to-head contest and they will be keen to go up in the points table.

According to Kheltalk’s DG vs BT Deam11 toss prediction, Gladiators will win the toss and will look to bowl first at this venue. Both teams will be keen to go for chasing as the pitch will assist the batters more