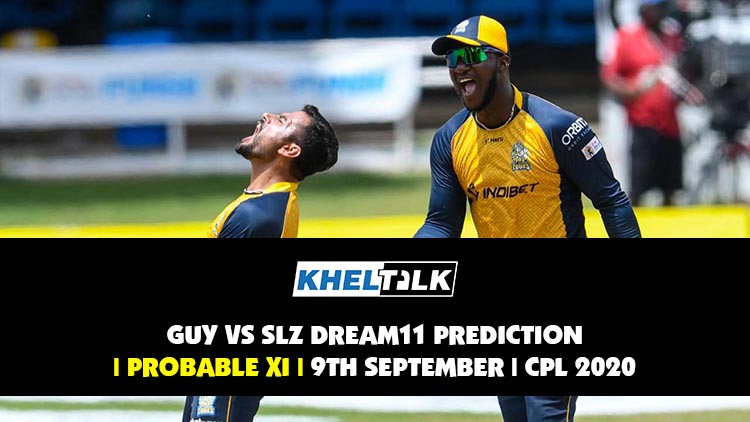 The Caribbean Premier League 2020 is heading towards the finals. And, the second semi-final match will be played between Guyana Amazon Warriors and St. Lucia Zouks at Brian Lara Stadium in Trinidad. Now, we are here to analyze and tell our followers about the best ENG vs AUS Dream11 Prediction, Probable Playing XI, and Fantasy Cricket Tips for the third and final game of the series that will be played at The Rice Bowl at Southampton.

Guyana Amazon Warriors defeated Barbados Tridents in their previous outing by six wickets. And, with that, they also finished their league stage on the second position with 12 points from 10 games played. There each and every player is performing brilliantly in their respective department.

The management will be expecting their side to continue with their winning momentum in order to successfully qualify for the final. Meanwhile, they will also have a big opportunity to avenge the loss of their previous defeat to St. Lucia Zouks during the early phase of the tournament.

St. Lucia Zouks ended on third in the league table with 12 points from 10 games. They easily qualified for the semi-final following their win against Jamaica Tallawahs by 11 runs. They have settled batting line-up with the likes of Rahkeem Cornwall, Mark Deyal, and Andre Fletcher.

At the same time, they have Roston Chase, who is a prolific all-rounder and he has performed exceedingly well in the ongoing season of the tournament. All the aforementioned players will try to the best of their abilities to snatch a win from the jaws of Guyana Amazon Warriors.

The left-handed West Indies international is batting at his best in the ongoing T20 tournament. He has muscled 267 runs off 10 innings with the help of three fifties. He can be a vital captain or vice-captain pick for any small league or grand league in Dream11 Fantasy game.

He has shown his batting abilities in the ongoing tournament. Thus far, he has scored 203 runs and grabbed 6 wickets with the ball. His all-rounder’s skills will play a key role in the semi-final match. Moreover, his astonishing form in this CPL makes him a perfect candidate for captain/vice-captain pick

The veteran spinner from South Africa is still outperforming every young bowler in the league. At the age of 41, he is still giving his best with the ball. The opponent batsmen are still failing to read the googlies bowled by the Proteas leg spinner. He has taken 15 wickets from 10 games and that makes him the 2nd leading wicket-taker in this edition.

GUY vs SLZ Dream11 Prediction: Who will win the 2nd semi-final match

Kheltalk has analyzed every aspect of Guyana Amazon Warriors and St. Lucia Zouks. Now, we have come down to the conclusion that GUY looks like the favorites to win the upcoming affair. They have defeated the same opponent previously in this edition only. So, they will have an edge over SLZ. Also, looking forward to the league table, GUY looks more consistent in terms of performance in comparison to that of SLZ. And, this is the reason we have picked GUY as the favorites to win the upcoming encounter.