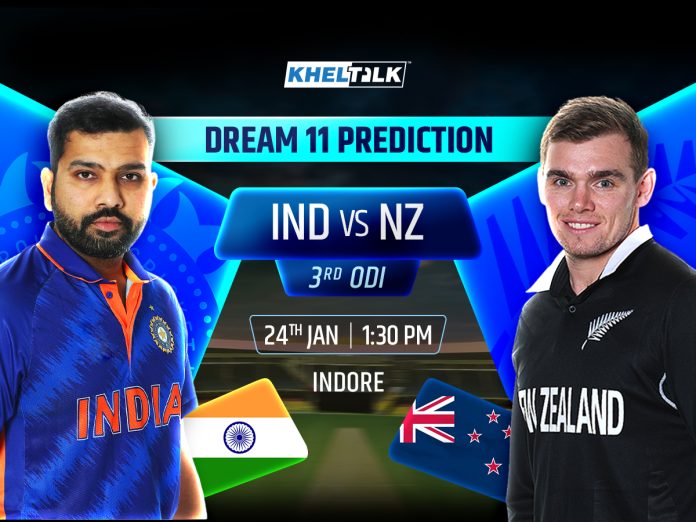 The Indian team has won the first two games and will look to experiment in the 3rd match. The team had a tough game in the 1st ODI where they won by just 12 runs. They came back stronger in the 2nd game to win it by eight wickets.

New Zealand came closer to victory in the first game, thanks to Michael Bracewell’s heroics at number 7. However, the team looked completely out of touch in the second game which they lost badly.

The weather is likely to be Cloudy and there is almost zero chance of rain according to the forecast. The temperature will be around 26 degrees Celsius which is good for a cricket game.

Shubman Gill was outstanding in the last two games. He smashed 208 runs from 149 deliveries while opening the batting for the team in the first game. He is currently the leading run-scorer of the series.

Michael Bracewell will look to dominate once again. He made 140 runs and almost took the team home in the opening game. He is currently the leading run-scorer for New Zealand. Bracewell also will be bowling a few overs.

Mohammad Shami has picked up four wickets in his last two matches. The pacer is likely to have a good end to the series for India. He is the player to watch out for here.

Who Will Win Today’s match Between IND vs NZ?

India will begin this game as a favorite once again. However, this match is likely to be a close encounter, unlike the opening match. Either way, the Indian team is likely to get on top here. Mohammad Siraj will be the player to watch out for in this game.

Who Will Win Today’s Toss Between IND vs NZ?

According to Kheltalk’s Toss Predictor, India is expected to win the toss and bowl first. Both teams will opt to chase here as the pitch will assist the batsmen more.