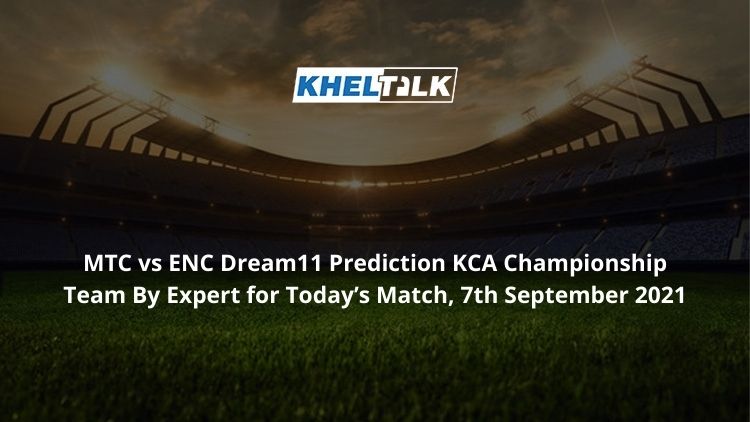 The pitch will assist the bowlers, especially, the spinners more. One can expect them to dominate right from ball one here. The pitch is on the slower side and the batting at this venue will be difficult. Thus, most of the teams prefer bowling first at this ve

Masters Cricket Membership would stepup unchanged after notching their opening game of the tournament against TRC by six wickets.

ENC might come up with few changes in their bowling department as their bowlers were quite expensive in their opening game. The game has temporarily stopped due to bad weather.

Rohan Kunnummel scored 24 runs off just 17 balls in the opening game for MTC. He hammered five fours and has a strike rate of 141.2. He looks in sublime form, don’t miss him out.

Krishna Prasad scored 43 runs off 41 balls including two fours and two sixes. He played sensibly while chasing 107 runs on the board. He quite made it easy for the middle orders to win the game.

Jafar Jamal played a powerpack cameo for MTC. He scored seven balls 19 runs and didn’t risk taking the game to the last over.

Vishwashwar Suresh, Vaiskhal Chandran, and S Joseph have bagged two wickets each for the side and were also super economical. They look in good touch.

Abhiram CH played an exceptional inning for ENC in the opening game. When every batsman failed to score runs, he hammered 40 runs off 35 balls including three fours and three sixes.

Jerin PS not only conceded just 21 runs in four overs for ENC but she also bagged a wicket. No other bowlers in the team were economical. He can be effective again.

Who Will Win Today Between MTC vs ENC Dream11 Prediction, Match 16?

According to Kheltalk’s astrology MTC vs ENC Dream11 match Prediction, MTC will begin this contest as favorites. Based on current form, MTC looks much better in terms of batting and bowling lineup when compared with ENC.

According to Kheltalk’s MTC vs ENC Dream11 toss prediction, MTC will win the toss and will bowl first here. Since the pitch is on the slower side, the teams will look to restrict their opponents to a lower score.