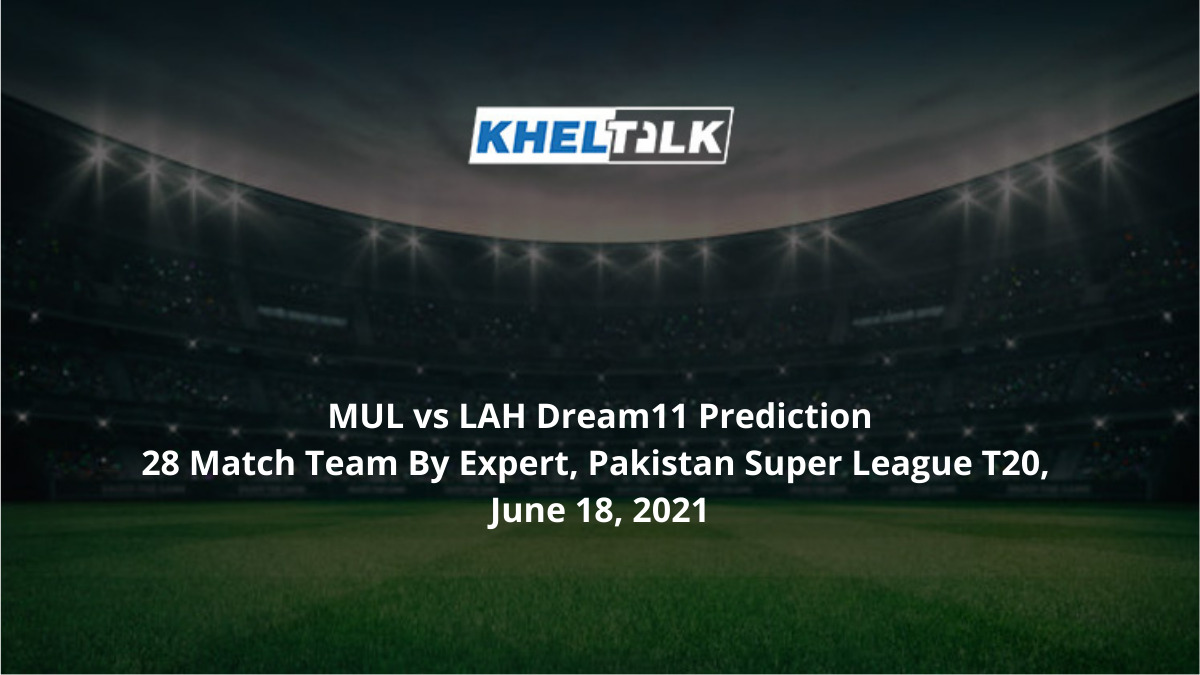 Welcome to MUL vs LAH Dream11 Prediction for Today’s Match Fantasy Cricket. Multan Sultans will take on Lahore Qalanders in Match 28 of the PSL 2021 on Friday, June 18, 2021, at the Sheikh Zayed Stadium, Abu Dhabi. Keep reading to find out about Match 28 between MUL vs LAH Dream11 team today.

Two balanced teams would step up to lock horns in the next fixture of the Pakistan Super League. Both have had a decent outing so far. With five wins from eight games, Qalanders sits at the third spot on the points table, meanwhile, Sultan Multans is just a position below with four wins from eight games. Another win will surely help them improve their position on the standings.

The pitch tends to get slower as the game progresses. Bowlers will have extra swing and bounce in the initial overs of the game. Batsmen will mostly target kit runs on the square and must be worried about spinners as the ball is likely to turn under the lights. The average score at this venue is 160. The team winning the toss is likely to go for the chase at this venue.

The temperature in Abu Dhabi is expected to be around 34 degrees Celsius. The humidity will mostly be in the 50s with no chance of rain at all.

Multan’s batting unit has done wonders with the like of Mohammad Rizwan. Credit must be given to the bowlers as well who have troubled the opposition in the middle overs. Eyes would be on Imran Tahir and Shahnawaz Dhani, who are expected to keep it tight for the Qalanders.

Lahore Qalanders would be a bit relaxed as they are in a situation where their playoff hopes are concerned. Qalanders are stuffed with great bowling attacks. Spin option Rashid Khan needs no introduction and Haris Rauf, James Faulkner, Shaheen Afridi have also been lethal. The batting department needs to step up in order to place themselves in the top two positions of the standings.

Mohammad Rizwan has taken his hitting to next level. In eight innings, he has hammered 429 runs with the highest score of unbeaten 82. He is known for playing sensible cricket and that how he has troubled the opposition. So far, he has hit 47 fours and 9 sixes.

Shahnaz Dhani has turned out to be one of the most effective bowlers in the tournament. He has been lethal in every game and has 14 wickets scalps in seven innings at an economy of 9.43. Best choice as captain.

Top-order batsmen Fakhar Zaman and M Hafeez have been delivering well for the Qalanders. Their appearance makes the oppostion a bit worried. So far, they have scored 255 and 221 runs respectively and this speaks a lot about their form and temperament. Don’t miss them out.

Faulker (11) and Shaheen Afridi (12) are the leading wicket-taker for the side. Not just they have chipped wickets but have been super economical and have prevented the batsmen from scoring runs in their spell.

Who Will Win Today between MUL vs LAH Dream11 Prediction, 28th Match?

According to Khel Talk’s prediction for MUL vs LAH Dream11 Match Prediction, LAH is expected to win this fixture. Both sides have a balanced squad on the papers, so it’s hard to predict a winner here. Qalandar stands a bit ahead as they have more international talents in their line-up.

According to Kheltalk’s MUL vs LAH Dream11 Toss Prediction, LAH would win the toss and elect to bowl first. Batting second is a better option here as the chase gets easier at this venue

Disclaimer: Fantasy Cricket is a game of skill and luck is also very much important to win the grand league in dream11.