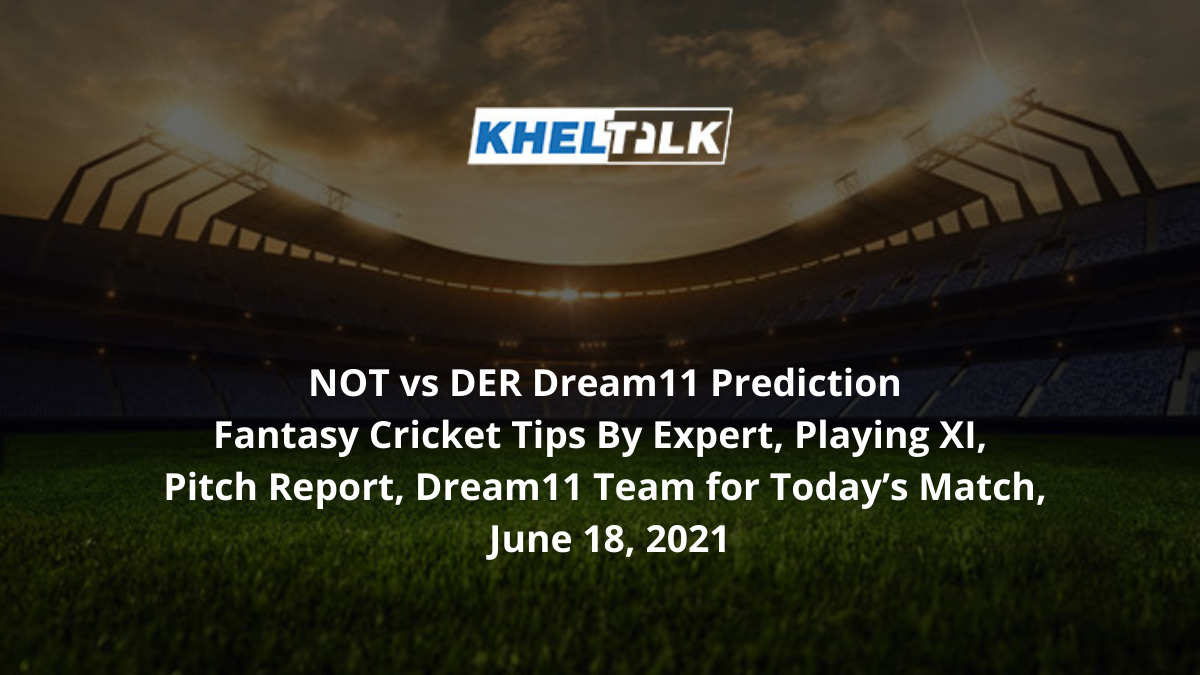 Derbyshire began the tournament with a couple of close games where they ended on the wrong side of the result. However, they had found a way to take down Leicestershire and got down to the Bears. However, they will enter this contest after defeating Northamptonshire comfortably in their last match. They are currently in the 7th spot on the table.

Nottinghamshire had a tie against the Worcs to start the tournament. Then the team had a loss against the Bears before bouncing back to win their last two contest. They are in excellent form at the moment and a win here will take them to the 4th spot from the 5th, thanks to their positive net run rate.

In the last five contests between these two teams, Notts had found a way to win four of them while one match was abandoned due to rain.

NOT vs DER Dream11 Match Prediction

Trent Bridge is a batting-friendly one and most of the teams have managed to reach 200 with ease here. In fact, in the only match at this venue in Vitality Blast 2021, The Notts almost chased down 230. They got to 211 to give an 18-run win to the Bears.

Just like every other place in the UK, Nottingham is all set to witness rains on Friday. According to the forecast, the temperature will be around 15 degrees Celcius and there is a 76 per cent chance for rain. The climate is likely to influence the result of the game.

The Notts are the best team here and is good to go with more players from the team. Also, Derbyshire has a good bowling line-up. So, make sure to pick more bowlers from Derbyshire.

Luis Reece has been a revelation in this tournament. While other players like Plooy, Guest have contributed well, Reece stands out. Fynn Hudson-Prentice is more of a trump card here and if he goes well today, the team has a good chance of winning this.

Alex Hales has found his form at the right moment and could prove vital in this contest. Ben Duckett will be playing the aggressive role here while Tom Moores will be the second fiddle for the man. If they can get going today, it will be an interesting contest for sure.

Joe Clarke loves to deal in sixes and he has scored eight of them so far; is likely to add more here. He so far has 207 runs from his 4 innings with the best of 136. He has a strike rate close to 205 and is one of the mandatory picks here.

Alex Hales needs no introduction. The England opener has managed to grab some important runs in the tournament so far and has 141 runs from 4 innings with an average of 47 to his name. He has a strike rate of 165.88 and is likely to smash at least 30 to 40 runs today.

Luis Reece began the tournament well and is likely to bounce back after a couple of dim nights. He so far has 155 runs from his five outings. He averages 31 in this tournament and is likely to dominate in this contest. He will bowl a few overs here.

Matt Critchley can contribute from both fronts and is in good touch at the moment. In his last match, he smashed 44 runs and also went on to pick up a couple of wickets. Overall, he has 158 runs and also has managed to pick up six wickets.

NOT vs DER- Top Picks by experts

Logan Van Beek is the leading wicket-taker for his team and is likely to grab a couple of wickets today. He so far has seven wickets with an economy rate close to 10.

Hudson-Prentice could be the game-changer here. Though a bit inconsistent, he can change the course of the game on his given day. He so far has seven wickets and also has 66 runs to his name.

Head to Head Dream11 Team Prediction NOT vs DER

Who Will Win Today Between NOT vs DER Dream11 Prediction, North Group?

According to Kheltalk’s astrology NOT vs DER Dream11 match Prediction, NOT will begin this contest as favorites. Nottinghamshire has a better batting lineup and the team have managed to do well in the tournament so far and will be keen to add three wins in a row now.

NOT vs DER Toss Prediction today

According to Kheltalk’s NOT vs DER Dream11 toss prediction, Notts are likely to bowl first at this contest. Since rain is on cards, most of the teams will prefer batting second at this venue. Anything under 170 is easily chasable here.