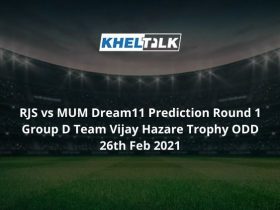 Both Rajasthan Royals and Punjab Kings have a few things in common. One of them is they ended up at the bottom of the table in the last edition and the other is they have bought some of the bigger names in this year’s IPL auction.

Rajasthan Royals have spent all their penny on Chris Morris who is expected to play all games and will don the finisher role as well. The team also has the service of Ben Stokes and they had to let go of their previous year’s captain, Steve Smith. Under Sanju Samson, the team is expected to revamp themselves. All eyes will be on the youngster Chetan Sakariya in the absence of Jofra Archer.

Punjab Kings, on the other hand, had a brilliant batting attack but their bowlers weren’t up to the mark and this year, they went for two brilliant picks, Jhye Richardson and Riley Meredith. Both the players are coming in after a successful BBL and would look to dominate here as well.

Here are the stats for the teams RR vs PBKS

Wankhede Stadium is usually a high scoring pitch and will provide support to the pacers as well, which means, both teams will have a good night here. However, the boundaries are pretty small making it easier for the power-hitters to clear the fence with ease. Both teams will look to add more pacers and all-rounders to their line-up and would reduce the number of spinners here as they were taken for runs in recent matches.

In the last match, we did see Delhi Capitals chasing down a good total with ease and one can expect the pitch to act in the same way. Chasing will be the point here and both teams will be happy to do that. The average first innings score is 166 and the team batting second have won 38 matches out of 74.

Punjab Kings’ Jhye Richardson will be the player to watch out for at this venue alongside Mustafizur Rahman if they were given an opportunity. In the absence of Jofra Archer, Rahman would fit the void. However, the team is likely to opt for an extra batter here.

Jofra Archer is yet to recover from his injury and is likely to miss the first four games for the team. However, the team do have a good bowling line-up to make it for the same. Ben Stokes, Jos Buttler, Chris Morris and Mustafizur Rahman are likely to the four overseas players for the night.

On papers, Punjab Kings are all set to dominate but we know how it goes every single year. The team would look to change the fortunes this time, probably, the team change might come in handy too. With Rahul and Agarwal opening the innings, the team will look to play Jhye Richardson here alongside Murugan Ashwin and Ravi Bishnoi. Dawid Malan or Chris Gayle is likely to be the other overseas player alongside Nicholas Pooran.

KL Rahul had an excellent season last year where he dominated almost all the opponent and ended up as the top scorer of the tournament, the PBKS captain once again will look to replicate a similar season with the bat. He had 670 runs in the last season.

Sanju Samson will be looking to lead his team well too. He has been appointed as the full captain for the first time in the IPL. He began the season well in 2020 and ended up scoring 375 runs. The team will definitely need more from him. Last year, he smashed 85 from just 42 against the same team.

Mayank Agarwal will be opening the innings once again and he is more of a tricky pick for the captain here but can come good on his day. Last year, he smashed 106 from just 50 deliveries against the same opponent. He has the ability to replicate the same here as well. In the last season, he ended up with 424 runs.

Ben Stokes had a good 2021 season where he dominated with the bat whenever was given an opportunity. In the 2020/21 season, he had played 5 T20I innings, scored 137 runs with a strike rate over 150 and with the ball, he also had a few wickets to his name with an economy rate lesser than 9.

Last year, Rahul Tewatia had a breakthrough season and even went on to get into the Indian T20I squad. He is the one to watch out for in this contest, after all, his brilliance came against the same team.

Chris Morris will be under pressure to perform here, especially, after going for a lot in the auction. So, we are going to see more of him in this tournament and is likely to bat at the top as well.

Jhye Richardson was the leading wicket-taker in the recently concluded Big Bash League and is in good form lately. Mumbai will assist his pace and if he can come up with a good spell, Punjab will be on top right from game one.

Here is the Dream 11 Team prediction for RR vs PBKS. We are going with players who are currently in good form and can win the match with ease.

Head To Head Team For Rajasthan Royals vs Punjab Kings

Who Will Win Today Between RR vs PBKS Dream11 Prediction, Match 4?

According to Kheltalk’s astrology RR vs PBKS Dream11 match Prediction, PBKS will win the match. PBKS has a good number of batters as well their batting looks strong compared to Rajasthan Royals. If their bowlers come good here, the team is likely to win this contest.

According to Kheltalk’s RR vs PBKS Dream11 toss prediction, PBKS will win the toss and opt to bowl first. Whoever wins the toss, will look to bat second here, especially, after watching what Delhi Capitals had achieved against Chennai Super Kings recently.