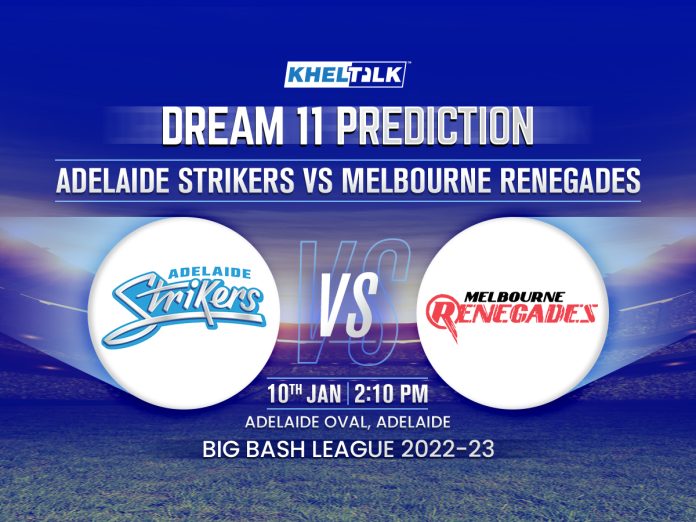 Welcome to STR vs REN Dream11 Prediction for Today’s Match Fantasy Cricket, Melbourne Renegades will take on the Adelaide Strikers in the 36th BBL match on Tuesday, 10th JAN 2023, at Adelaide. Keep reading to find out about the BBL STR vs REN Match Dream11 team today.

Adelaide Strikers and Melbourne Renegades will meet for the first time in the tournament. Both teams have had ups and downs in the tournament so far. Renegades, who won their first three matches in a row, lost four games before winning their last two games.

Strikers, on the other hand, had a positive start to the tournament but they lost their way in the middle to lose four matches. They have four wins and four losses from their eight games.

Going by what we have seen in the Women’s Big Bash League tournament, one can expect this match to be a high-scoring one. Also, most of the matches in WBBL went to the team chasing.

The day will be cloudy according to the forecast. Adelaide might witness a few drops of rain but that is unlikely to impact the match here. The temperature will be around 21 degrees Celcius and is likely to go down during the match.

Matthew Short has been the best performer for Adelaide Strikers in this year’s BBL. The batsman averages close to 41 and has scored 366 runs in his last ten matches. He is the one to watch out for here.

Chris Lynn’s aggressiveness makes him an ideal choice for this game. The opener has scored 324 runs in his eight matches with a strike rate close to 141. He will be keen for some success here.

Aaron Finch will be keen to break back to form in this game. The batsman has scored 324 runs in his last ten matches and has an average of close to 41. He will be one of the players to watch out for here.

Kane Richardson and Akeal Hosein will lead the bowling attack for Renegades. The duo has picked up 21 wickets in the nine matches they have played so far.

Henry Thornton holds the key in the bowling department for Adelaide Strikers. He has picked up 19 wickets in his nine matches and is expected to play a major role once again.

ALL: M Short, A Hosein

Who Will Win Today Between STR vs REN Dream11 Prediction, Today Match?

According to Kheltalk’s astrology, STR vs REN Dream11 match Prediction, Strikers will begin this contest as favorites. Though they had lost their last few matches, they have star performers in the team and they are likely to bounce back in this contest.

According to Kheltalk’s STR vs REN Dream11 toss prediction, Since this is a good batting track, teams are likely to go for chasing at this venue. Renegades are the favorites to win the toss here.