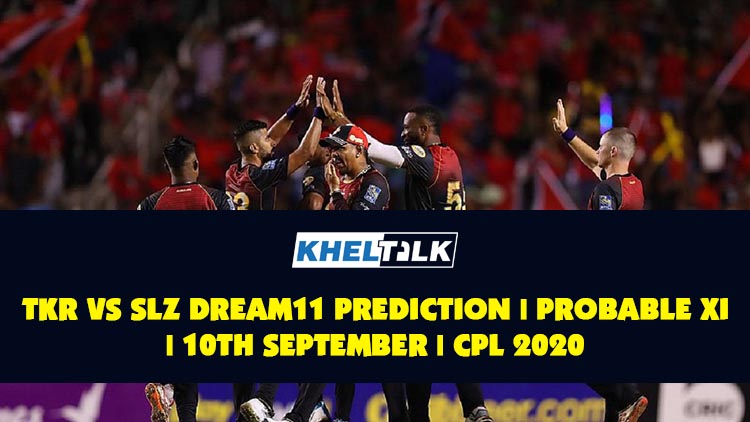 The stage is set for Caribbean Premier League 2020 final that will be played between Trinbago Knight Riders and St. Lucia Zouks on September 10. After a long league stage followed by exciting semi-finals, CPL 2020 has got its finalists. And, today we are here to analyze and give out our review over TKR vs SLZ  Dream11 Prediction, Probable Playing XI, and Fantasy Cricket Tips.

Trinbago Knight Riders look like an organized side, who have not faced a single defeat in this edition of the tournament. All their players are performing brilliantly in their respective departments. The batsmen are scoring runs at a good strike rate. On the other hand, the bowlers are also complementing well by restricting the opponent from chasing the target. Lendl Simmons, Tion Webster, and Darren Bravo are playing in their top-notch form. Meanwhile, in bowling Fawad Ahmed, Akeal Hosein have given significant outcome in the ongoing tournament. TKR have all their bases covered and they also look like the exact favorites to win the CPL 2020 final.

St. Lucia Zouks performed astonishingly well in the semi-final against Guyana Amazon Warriors. The former defeated GUY by 10 wickets in a low scoring encounter. SLZ bowler’s dismissed opponent at a lowly score of 55 runs in 13.4 overs. And, this score was next to impossible for any bowling unit to defend against heavy-duty batting of SLZ.

The management will be expecting the same kind of performance from their side for one last time in CPL 2020. If SLZ could manage to pull off a performance similar to the one they gave in the semi-final then they might be able to outclass the final favorites Trinbago Knight Riders, who have not suffered a single upset in this edition.

The right-handed veteran West Indies opener has been performing at his best for Trinbago Knight Riders. In the previous game, he scored a magnificent fifty for his team. Moreover, he is currently the second leading run-scorer of the tournament with 272 runs from 10 innings. This is why we have picked him as one of the players that can be picked as captain or vice-captain in any Dream11 Fantasy team.

The left-handed West Indies international has rescued his side whenever needed during the games. He has already scored two fifties in CPL 2020. And, he will look to sign off his tournament with a bang on performance. So far, he has scored 239 runs from 11 games.

He is the leading wicket-taker from St. Lucia Zouks with 16 wickets from 10 appearances. Also, he has taken one four wicket-haul in CPL 2020. And, if he got a little bit of assistance from the wicket during the final game then he might leave a big impact with the ball over the outcome of the game.

TKR vs SLZ Dream11 Prediction: Who will win the final match

Kheltalk has analyzed every aspect of Trinbago Knight Riders and St. Lucia Zouks. Now, we have come down to the conclusion that TKR looks like the favorites to win the CPL 2020 Final. They have defeated the same opponent previously in this edition only. So, they will have an edge over SLZ. Also, looking forward to the unbelievable form of Knight Riders throughout the Caribbean Premier League makes them the perfect side to win the upcoming game and get their hands on the prestigious tournament trophy.