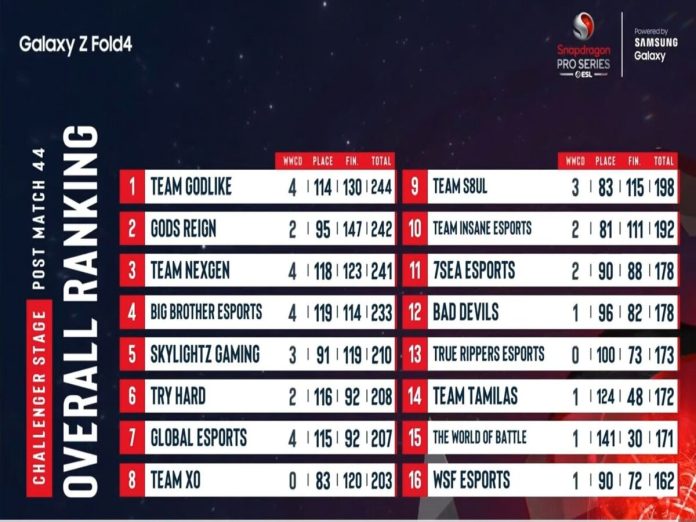 After 8 days of high-octane action and intense battles vying for the top spot, the PUBG New State Pro Series’ Mobile Challenger stage has officially concluded. 32 teams competed in 22 games over eight match days, but only 24 advanced to the Finale. GodLike Esports, who are widely regarded as the top team, won with 244 points. On the last day, Gods Reign advanced eight positions to finish in second place. The team had the most frags with 147 and achieved an astounding 80 points on the last day. You can find the overall standings, match-wise summary and the qualified teams here below.

Global Esports won the opening match of day 8 of the PUBG New State Pro Series Mobile Challenger with 10 frags. With eight frags, Marcos Gaming was right behind them.

Gods Reign prevailed in Troi in the second game with 11 frags using impeccable rotation. With seven frags, Bad Devils came in second, and Reckoning finished third with one frag.

After 14 frags, Marcos Gaming prevailed in the third game of the day. In the game’s last circle, MG Shadow was the only person still alive while the other three teams fought over healing. Despite being eliminated prematurely, Team Nextgen still managed to score nine significant frags.

In the fourth game, Nextgen pushed hard and amassed 13 frags. Hector’s side, XSpark, moved up to second place after winning the healing fight, while S8ul only managed to score two frags.

The fifth match between Groups B and D was unexpectedly won by Wanted Gaming with 10 frags. With 13 eliminations, Gods Reign took first place in the match rankings.

Global Esports won the last PUBG New State Mobile Challenger match between Groups B and D in Troi, but Gods Reign once again put up a stunning performance to take first place in the match rankings with 12 frags.