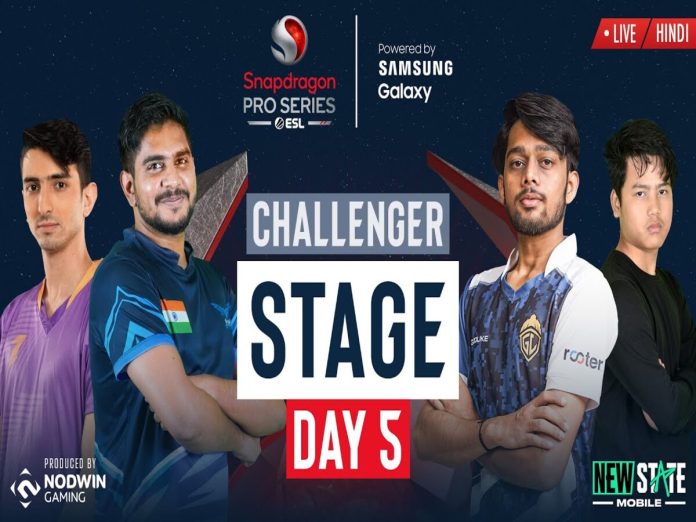 Try Hard, the underdogs, maintained their lead with 157 points and also led in positioning with 92 points. They are trailed by Squad Nextgen, which has so far been the PUBG New State competition’s most impressive team. The group finished in second place after moving up eight positions today. Despite failing to acquire any chicken dinner, Team XO finished in third place overall with 144 points. GodLike and Team S8ul are both in the top five, with Team S8ul coming in ninth. Here are the details of what went down on Day 5 in the PUBG New State Pro Series Mobile Challenger.

The top 5 rankings after Day 5 are as follows:

In the first match between Groups, A and B held in Erangel, Team Insane Esports showed exemplary performance. Boasting a massive  19 finishes, including seven by their top player Roach alone, they won the chicken dinner. Without scoring a single frag, Team Zero Gravity was able to place second.

UDog India triumphed in the second match with 14 frags. This game helped them to rise fourteen spots to take up the 14th spot in the overall rankings. By playing conservatively and placing more emphasis on placement points, Team Tamilas won second place.

With 11 frags, GodLike won the third game of the day. The group demonstrated consistent play while emphasizing rotation and kill points. Team XO destroyed the lobby by accumulating 16 frags.

The fourth match of day 5 of the PUBG New State Pro Series Mobile Challenger was claimed by GodLike Craveey, who prevailed in a 1v1 encounter against XO Fierce. Zero Gravity took 14 frags in the game.

The fifth game of the day was played on Erangel. With 12 frags, Team Nextgen finally succeeded in securing a chicken dinner. Another healing fight, which took place throughout the game decided the game’s runners-up, who were Chemin Esports.

With 19 frags, Team Nextgen finished the day’s last battle and moved up to a second position in the overall standings as they carried on their winning streak. Global Esports lost the game early but still managed to gather nine crucial frags.