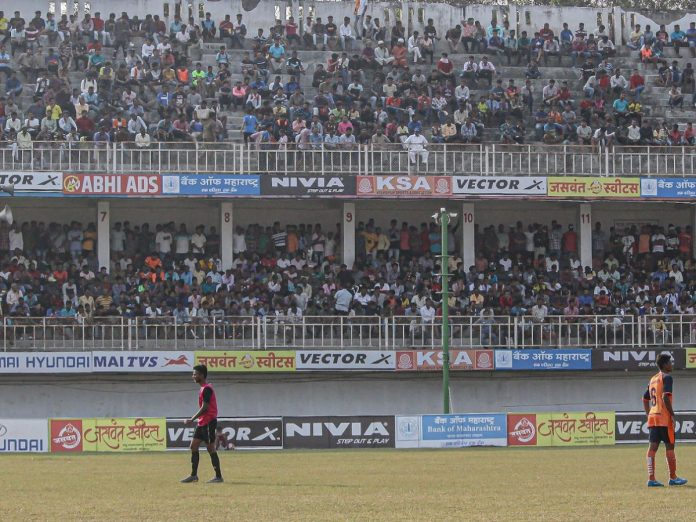 Maharashtra was locking horns with Bengal in a Santosh Trophy match at Kolhapur on 15th January 2023. Thousands of fans flocked to the stadium to extend their unflinching support to the home team and also created an electrifying atmosphere in the stadium. The All-India Football Federation (AIFF) President Kalyan Chaubey took to Twitter to share a video where the craze of the crowd was visible.

“This is Santosh Trophy in Kolhapur, today match is between West Bengal 2-1 Maharashtra. ‘Indian Football has huge potential to grow,” wrote Kalyan Chaubey on Twitter.

Several football lovers created a buzz on social media platforms with this viral video as the stadium was completely jam-packed with football lovers and supporters. The video went extremely viral and could be found on several people’s stories.

Bengal defeated the home side 2-1 to take the honors of this particular Santosh Trophy match. They now top the charts of Group 4 in the ongoing Santosh Trophy, with 5 straight wins under their belt.

Maharashtra on the other hand is in the 2nd position and has incurred only 1 loss in the tournament. This loss came at the hands of Bengal in this game itself. The Shree Shiv Chhatrapati Sports Complex in Kolhapur witnessed more than 20,000 energetic fans, extending their unconditional support to the Maharashtra team.

Surajit Hansda and Deepak Kumar found the back of the net for Bengal and Arif Shaikh scored the lone, consolation goal for the home side. The Santosh Trophy holds a lot of significance in the Indian footballing history and heritage. It was founded way back in 82 years and the current champions are Kerala. It is their 8th title.

The most successful team is Bengal, which has won 32 titles so far. Needless to say, Bengal is a powerhouse of Indian football and the fact that they have won it on so many occasions, proves this.