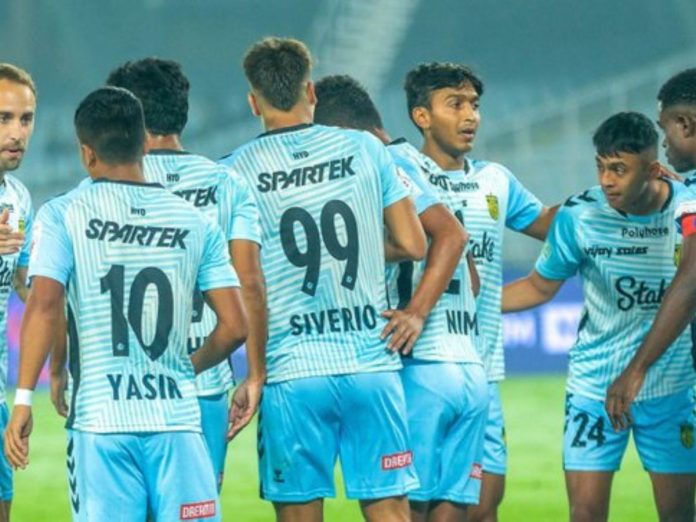 East Bengal FC would be heavily disappointed with the chances they missed in the entire game as they succumbed to their third defeat in succession and also their 10th defeat in the ongoing Indian Super League (ISL) 2022-23 season. Hyderabad FC defeated East Bengal FC 2-0 and both the goals came in the starting and ending moments of the game.

Javier Siverio drew first blood for the Nizams as he was unmarked at the right corner of the goal. A looping cross from Borja Herrera found Siverio, who made a sharp run to head the ball straight into the back of the net.

Even though East Bengal FC kept playing their usual long-ball strategy and kept their intent high, Hyderabad FC’s sterling defence made sure they do not score a goal. There were however several chances that the Red and Gold Brigade did not take and that came back to bite them later.

Lalchungnunga sprayed a long throw from the right flank and that was headed beautifully by V.P. Suhair. But his header failed to find the back of the net as it hit the crossbar. It was a very close chance nevertheless for East Bengal FC.

The second half witnessed a lot more intent from East Bengal FC. The likes of Lalchungnunga, Jordan O’Doherty and Charis Kyriakou did well to avert the incoming threats. East Bengal FC’s leading goal-scorer Cleiton Silva had several opportunities but luck didn’t favour them as their chances couldn’t get converted into a goal.

Two minutes into the stoppage time and Bartholomew Ogbeche’s exceptional back-heel found D’Silva to score a goal from a tight angle and seal the deal for Hyderabad FC. East Bengal FC had no chance of scripting a comeback from there.

In hindsight, the Red and Gold Brigade would be extremely upset with this loss at the hands of the defending champions of ISL. They fought valiantly but luck eluded them in this ISL 2022-23 game. Hyderabad FC now solidify their position in the ISL 2022-23 points table and are just 4 points short of table-toppers Mumbai City FC.