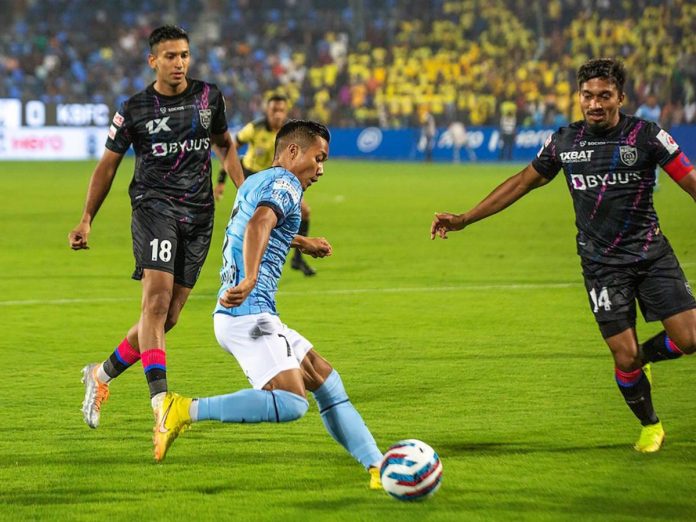 Mumbai City FC continued their dominating form in the ongoing Indian Super League (ISL) 2022-23 as they steamrolled past Kerala Blasters FC 4-0 at the Mumbai Football Arena in Mumbai. Des Buckingham’s men climbed to the top of the table after eclipsing past the defending champions, Hyderabad FC.

All the action in this game took place in the 1st half. 4 goals were scored and that was enough to blow away the opposition. Kerala Blasters FC could not recover from the annihilation in the 1st half and failed to breach the defence of the Islanders.

Jorge Pereyra Diaz netted a brace and Greg Stewart and Bipin Singh scored 1 goal each, as Mumbai City FC stamped their dominating authority in supreme fashion. All the goals came within the first 20-25 minutes of this game and this sealed the fate for Mumbai.

Mumbai thereby completes a double over Ivan Vukomanovic’s side. They had defeated Kerala Blasters FC 2-0, the last time they had met in October. Mehtab Singh and Jorge Pereyra Diaz had scored the goals for Des Buckingham’s side in that game.

With this win, Mumbai City FC reclaimed the top spot. They are the only side in ISL 2022-23 that has not lost a single game. Mumbai’s hot and blistering form has made them the frontrunners to win this year’s ISL League Shield as well as the ISL trophy.

Mumbai City FC next travel to Kolkata to face the ATK Mohun Bagan challenge on 14th January 2023. Kerala Blasters FC on the other hand will be facing FC Goa on 22nd January 2023. They have a lot of days to regroup and come back stronger and Head Coach Ivan Vukomanovic would be looking to bounce back from this humiliating rout.

With this game, Match week 14 of the ISL 2022-23 gets completed. The next game will be taking place on 12th January and it will be played between the reigning champions Hyderabad FC and Chennaiyin FC.