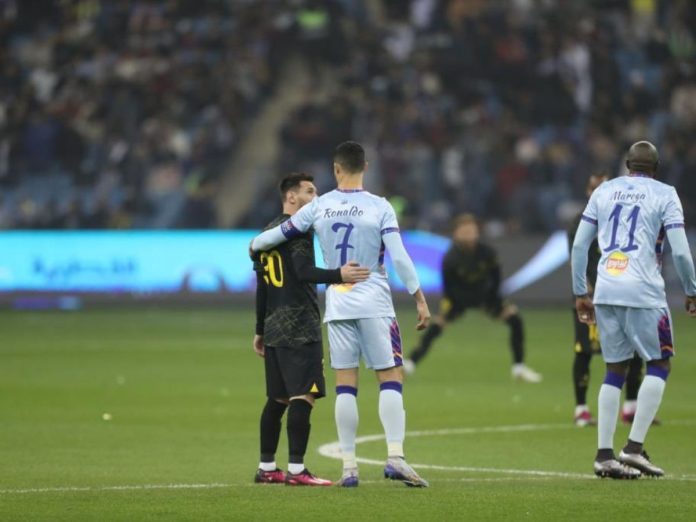 Footballing lovers all across the globe were treated to a pulsating and heart-throbbing game between PSG and Riyad All Star XI, which was skippered by the legendary striker Cristiano Ronaldo. It was Ronaldo’s debut game in Saudi Arabia and he hogged the limelight, just like he always does.

It was a goal-fest at the King Fahd International Stadium as a total of 9 goals were scored by the two teams. Ultimately, PSG held their nerves and edged past Riyadh XI as the likes of Neymar and Lionel Messi shone on the grand stage.

Cristiano Ronaldo stunned everyone as he jumped back to form and put a lid on the mouth of all his naysayers. The 37-year-old Portuguese striker scored 2 goals as he left a mark in his debut game in the Arab nation.

The first goal came via a penalty and the second goal was a quintessential Ronaldo goal. After his free-kick was blocked by the PSG wall which had defenders, Ronaldo struck with his left foot to find the back of the net. This special goal came in the 45+5th minute as the entire crowd was treated to some enticing action.

Lionel Messi had scored a goal in the 3rd minute of the game itself and continued from where he left off. Notably, the 35-year-old talismanic striker recently won the FIFA World Cup 2022 which took place in Qatar.

He scored 7 goals in the prestigious competition and bagged the Golden Ball award. This elite award is given to the best player in the tournament and deservedly, the Argentine forward laid his hands on this award.

Jang Hyun-soo and Talisca netted the other goals for Riyadh XI as they fought really valiantly against a strong and formidable PSG unit, which boasted exciting players like Lionel Messi, Kylian Mbappe, Sergio Ramos, and Neymar.

Marquinhos, Sergio Ramos, Kylian Mbappe, and Hugo Ekitike netted the other goals for the French club. Notably, just before the half-time whistle blew and just before Ronaldo netted his second goal, Neymar missed a goal from the spot. If his penalty would have been converted, then PSG would have scored 6 goals in the game.