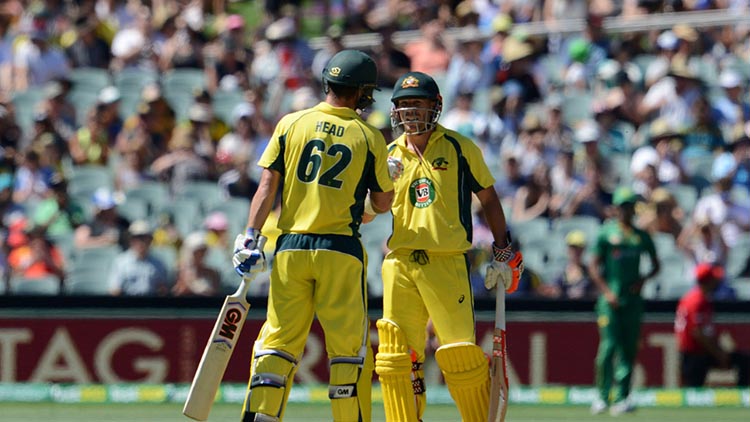 Cricket is an exciting sport! Sometimes, you may see bowlers being so dominant that even batting heavy sides are packed at a lower score. On the other hand, sometimes, the opening partnership does not get broken, and then, records are created! This unpredictable nature of Cricket makes it such a fantastic sport to play and watch!

Over the years, many opening combinations of Teams have managed to score the highest partnership in ODI for 1st wicket.

West Indies openers did the unthinkable against the minnows Ireland in 2019! They came up with the highest opening partnership in ODI. These batsmen smashed Ireland bowlers all around and did not allow them to settle. In the process, they went on to create a record – the highest 1st wicket partnership in ODI of 365 runs. In the process, Campbell scored 179 in 137 balls. His knock had 15 fours and 6 sixes. On the other hand, Hope scored 170 off 152 balls with 2 hits of out of the park and 22 boundaries.

In a game against Zimbabwe in 2018, Pakistan openers Imam Ul Haq and Fakhar Zaman made mincemeat of the opposition bowlers. In the process of playing some flamboyant Cricket, the two batsmen broke the record of the highest 1st wicket partnership in ODI. They hit 304 runs. The highlight of this stand was the double ton of Fakhar Zaman – the first Pakistani batsman to do so! It was the veteran opening Star Saeed Anwar who had the record of highest individual score of 194. Anwar had made 194 against India way back in 1997.

Bangladesh is an unpredictable ODI Team just like Pakistan and can spring a surprise when they had a good day. Tamim Iqbal and Liton Das, the Bangladesh openers did the same in a match against Zimbabwe in 2020. They went on to play a historic inning together and scored a total of 292 runs between them for the first wicket. It was a rain-affected game and was reduced to 43 overs per side. And Bangladesh finished on 322/3 with 292 of those coming from the blades of Tamim Iqbal and Liton Das. Their record was the highest partnership for any wicket for Bangladesh. Liton amassed 176 in 143 balls (highest individual score for Bangladesh in ODIs). On the other hand, Tamim stayed Not Out on 128 off only 109 balls. Many Bangladeshi Cricket fans enjoyed their heroes creating the highest first wicket partnership in ODI – a proud moment for Bangladesh Cricket!

For Sri Lankan Cricket, the duo of Upul Tharanga and Sanath Jayasurya has been one of their batting mainstays for years. In a 2006 match Vs England, Tharanga and Jayasurya came up with the highest opening partnership in ODI. The pair went on to thrash England bowlers and scored 286 runs between them. While chasing England’s formidable 321, the Sri Lankan openers cut loose from the word ‘Go.’ Tharanga scored 109 off 102 balls with 14 fours and 1 six. On the other hand, Sanath Jayasurya was more of the brutal between the two. The Southpaw hit 152 in only 99 balls with 20 boundaries and 4 maximums. Sri Lanka rode on the partnership of these exemplary batsmen to defeat England by 8 wickets in 37.3 overs – scoring at a run rate of 8.64. Earlier, England had scored 321 owing to a brilliant ton by Marcus Trescothick, who hit 121.

If you follow the game passionately, then you may have an idea of how brutal is David Warner as an opening batsman. He can thrash bowlers all around the ground from the word ‘Go.’ And it happened during a game against Pakistan in 2017. Along with a new partner in Travis Head, Warner collaborated to smash partnership records. They scored a total of 284 runs for the 1st wicket. In the process, the duo toppled Australia’s best opening partnership in ODI of 246 (Marsh and Finch in 2013 Vs Scotland). Warner scored his career-best record of 179 in 128 balls with 19 fours and 5 sixes. It was the first century for Head, who hit 128 in 137 balls with 9 fours and 3 sixes. Australia posted a giant total of 369/7 in 50 overs – thanks to some sizzling batting performances by Head and Warner.

Now you know the highest opening partnership in ODI Cricket. We will keep bringing you many more such exciting records. Stay tuned to KhelTalk for more!