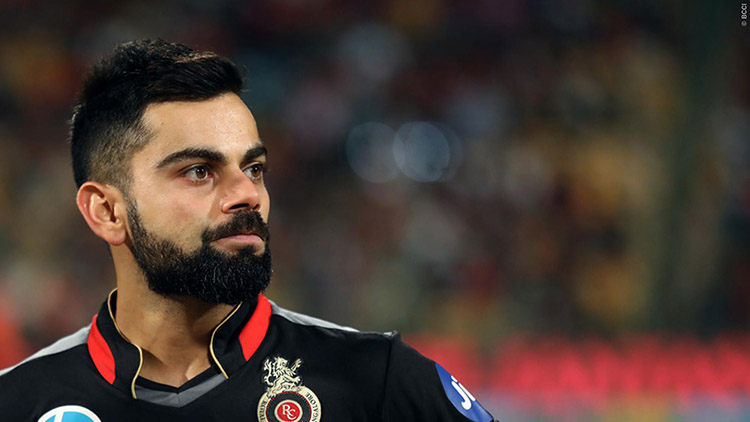 Virat Kohli is the new run machine that the world is now aware of. He is a unique batsman to have made the term ‘run machine’ his own after Sachin Tendulkar. The passion, aggression to the hunger for runs and success make him a rarity. Virat is undoubtedly one of the modern-day greats and already a legend in the making.

The Indian Captain considers International Cricket fixtures and Indian Premier League (IPL) equally. And that’s why there is no surprise to see him breaking and setting new records in all type of fixtures.

Over the years, the Delhi born batsman has managed to make many vital records his own while batting for India. And it has continued for Royal Challengers Bangalore (RCB) in the IPL. The only thing that he had not been able to do is leading India to wins in ICC Tournaments. Even though he has made plenty of runs for RCB, he has not been able to win the franchise its maiden IPL yet.

Kohli has been a permanent member of the RCB since IPL started in 2008. What’s more, he is also the highest-paid player in the T20 extravaganza.

On that note, let’s have a look at 5 lesser-known records of Virat Kohli in this post!

#5 The youngest player to Captain an IPL Team

Before becoming the Captain of the RCB in IPL 2013, he also led it in the 2nd half of the 2012 edition. It was when the then Skipper Daniel Vettori was going through injury and poor form issues. But his debut as the Captain of the franchise came in 2011 itself. Owing to Vettori’s knee injury, Kohli slipped into the shoes of the Captain. His first match was Vs Rajasthan Royals. And RCB limited it to 146/6 after Virat invited the Team to bat first. RCB rode on the 70* off 44 balls by Gayle and chased the target in 17th over. They won the game by 9 wickets. When Kohli captained the side, he was 22 years and 187 days old. It made him the youngest Skipper in the IPL – a record that is yet to be broken.

Virat Kohli has managed to score 5412 runs in the IPL. And that makes him the highest run-scorer in the IPL. But he is not the only one to do so. He missed the opportunity in the 2019 edition of the league against CSK in the first game. Suresh Raina emerged as the first Indian to do so in the same game while batting in the 2nd innings. Raina is just behind Kohli with 5368 runs in the IPL. But that makes Virat Kohli the only Indian player to achieve that feat on Indian soil. He has featured in 156 IPL matches and made 5061 runs. His strike rate is 133.07 and a batting average of 39.53 – higher than Kohli’s IPL career. Kohli has managed to score all his 5 tons and 35 of the 36 fifties while playing on the Indian soil. During the IPL editions hosted by South Africa and UAE, he played in 18 games. But Virat could score only 1 half-century – his first in the IPL. Raina joins him as the 2nd highest run getting on the Indian soil with 4835 runs in 174 innings.

In a match Vs Rising Pune Supergiants (now, defunct) of the 2017 IPL, a good display of bowling by RCB restricted RPS to 157 for 3. In reply, Kohli started the proceedings with Travis Head. Alas, he did not have any support from another end. Virat was out in the 18th over with the score reading 84 for 9. When he got dismissed, Virat had scored 55 off 48 balls with 1 six and 4 boundaries. RCB could only manage 96/9 in 20 overs and lost the match by 61 runs. None of the batsmen could reach double digits. Even the highest partnership of 21 runs between him and ABD saw 17 being scored by Kohli. Overall, Kohli became the only batsmen to have scored a 50 when his other Team members failed to reach even double digits. Kedar Jadhav and S Aravind were other scorers with an individual score of 7 and 8 Not Out respectively.

#2 The only IPL Skipper to win against 11 Teams

Virat Kohli has many times been on the wrong side and criticized for being unable to help RCB win even 1 IPL title. But when it comes to winning, the right-hand bat Super Star does have a special IPL record in his name. He has captained the side against 11 sides. And he has also managed to win at least once Vs all those. Other than the existing 7 Teams, he has also won Vs Rising Pune Supergiants, Pune Warriors India, Gujarat Lions, and Deccan Chargers.

All these 4 Teams are defunct now. Gautam Gambhir has also managed to win Vs a total of 12 opponents as a Skipper in IPL. Gambhir was also able to win it against the 13th side against Kochi Tuskers Kerala. But Kolkata Knight Riders (KKR) failed to win its both matches in the 2010 season of the IPL. Rohit Sharma, MS Dhoni, and Adam Gilchrist are other skippers having won at least 1 game Vs 10 different sides. Gautam Gambhir, while leading Delhi and Kolkata franchise, led himself to the top of this list.

During the 2019 season of the IPL, RCB were involved in a do-or-die situation while taking on Rajasthan Royals. The match was being played at the Chinnaswamy Stadium in Bangalore. RR won the toss and asked RCB to bat first. But rain interrupted the game before a ball being bowled. The umpires decided to hold 5-overs per side game at the cut-off time. RCB came out to bat with Mr. 360 and Virat Kohli beginning the proceedings. The first ball of Varun Aaron was dispatched to the long-off fence by Kohli. He tried placing the ball over the extra-cover region. But it went all the way to a six via the third-man boundary. Kohli hit first 2 balls of an IPL inning for sixes. This way, he emerged as the only batsman to smack consecutive sixes on the first 2 balls of an IPL game. It was terrific to see RCB racing to 35 for no loss in 1.3 overs.

But Shreyas Gopal bounced back things for RR. He went on to take a famous hat trick. It included the prized wickets of Kohli and ABD. RCB scored a total of 62 runs for 7 in 5 overs. Virat made 25 runs off just 7 balls in the match. RR, in reply, was 41 in 3.2 overs when it lost its 1st wicket. The unpredictable Bangalore rain came back. And there was no more play possible. But it also saw Virat-led RCB getting edged from Playoffs. RCB had to win full points from this match to stay in the hunt in the IPL. But that has been the fate of RCB. Yes, it has performed poorly in group stages and then gasped to reach knockout stages.