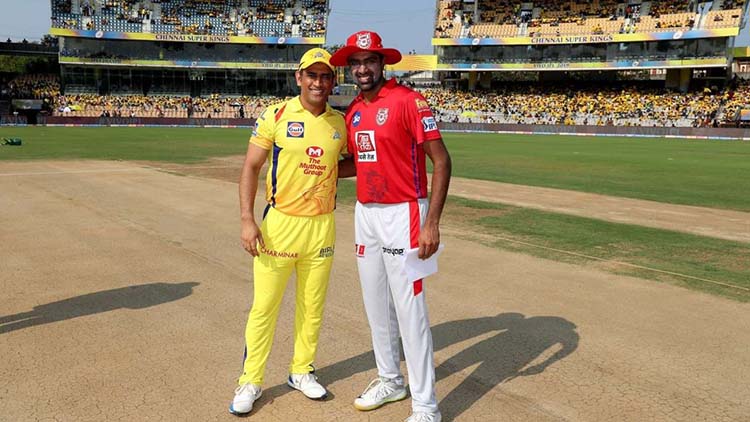 In this article, we are going to share CSK vs KXIP Head To Head Records from IPL 2008 till IPL 2019, which includes the match date, the number of matches played, match venue details & more.

Kings XI Punjab and Chennai Super Kings are two of the oldest IPL franchises. The two teams have been playing the tournament since season 1. Over the years, the two teams have met 21 times. CSK have emerged as winners on 12 occasions compared to KXIP’s 9. Here’s a detailed summary of the CSK vs KXIP head to head records.

2008 marked the beginning of the best T-20 league. Kings XI Punjab played Chennai Super Kings on three occasions during the first season. The first game between these two was played in Mohali on April 19. Punjab went on to lose the game at their home stadium. It was a big win for CSK who defeated Punjab by 33 runs.

CSK hosted KXIP at M A Chidambaram Stadium on May 9 to secure a win at home. CSK and KXIP met for the third time in the qualifier rounds. Chennai Super Kings secured another easy victory, winning the game by 9 wickets. CSK walked all over KXIP during IPL 2008.

Both clubs participated in the second edition of the Indian Premier League. They faced each other twice. The first game was played on May 7 in Centurion. CSK defeated KXIP by 12 runs. The reverse fixture was played in Durban on May 20. CSK registered another victory, beating KXIP by 24 runs in the process.

Head To Head Matches Between CSK and KXIP In IPL 2010

The third season of IPL saw Kings XI Punjab playing Chennai Super Kings on 2 occasions. Both fixtures were the customary round-robin league ties. The first game was played on March 21 at Chepauk Cricket Stadium. KXIP won the exciting match in a super over. After drawing level in normal 20 overs, both teams played on super over where KXIP emerged as the eventual champion. This was KXIP’s first win against CSK. The reverse fixture was played on April 18. Chennai Super Kings won the game by 6 wickets.

Head To Head Matches Between KXIP and CSK In IPL 2011

The two teams met only one time in the 2011 season. Kings XI Punjab won the game by 4 wickets. The two teams were seeded in different groups and met just once. The only game between the two was played at PCA Stadium, Mohali on April 13.

CSK opted to bat first and scored 188 runs in 20 overs at the fall of four wickets. KXIP made a memorable chase as they won the thrilling game in the last over of the match with 5 balls remaining and 4 wickets in hand.

Kings XI vs Super Kings Head To Head In IPL 2012

During the 5th edition of the Indian Premier League, Kings Eleven Punjab played Chennai Super Kings twice. KXIP won both the games making a clean sweep that season. The first fixture was played in Chennai where CSK suffered a home defeat. The reverse fixture was played in Dharamshala on May 17 where KXIP won the game by 6 wickets. CSK finished the season as runners-up while KXIP slipped to 6th position.

Super Kings vs Kings XI Head To Head In IPL 2013

In the 6th edition of IPL, CSK made a comeback against KXIP. They met twice as CSK secured a victory in both games. KXIP welcomed CSK at their home ground on April 10. The Chennai side won the game by 10 wickets. The reverse fixture was played on May 2 at M A Chidambaram Stadium. CSK won the game by 15 runs. Chennai Super Kings finished the season as runners-up.

In this season, these two teams met a total of three times. The first two games were customary round-robin league ties. The third match came in the qualifier rounds. KXIP were able to get the better of CSK on all 3 occasions this season.

The Punjab side won the first game against CSK played on April 18 by 44 runs. They met again on May 7 when KXIP beat CSK by 44 runs. The two teams met for the third time in a qualifier match played at Wankhede Stadium, Mumbai on May 30. KXIP won the game by 24 runs. The head to head tally shifted a little towards Kings XI Punjab.

The two teams met twice during the IPL 2015 season. CSK went on to win both the games. Chennai side totally outplayed Punjab side on both occasions. CSK won the first game by 97 runs. They beat KXIP in the reverse fixture by 7 wickets on May 16.

Punjab vs Chennai Head To Head In IPL 2018

During the IPL 2018 season, the two teams met twice. The first meeting was at Chandigarh on April 15. Kings Eleven Punjab won the game in a nail-biting fashion by 4 runs. The reverse fixture was played on May 20 in Pune. Chennai Super Kings won the game by 5 wickets in hand. By the end of the season, CSK had 11 wins against KXIP in 19 games.

Chennai vs Punjab Head To Head In IPL 2019

In the latest edition of IPL, CSK and KXIP faced off twice. They played the customary round-robin league fixtures. CSK welcomes the Punjabi side at M A Chidambaram Stadium on April 6. CSK won the game by 22 runs.

The reverse fixture was played in Chandigarh where KXIP won at home by 6 wickets. The season ended level on terms between these two teams. The all-time head to head tally stands at 12-9 in favor of Chennai Super Kings.