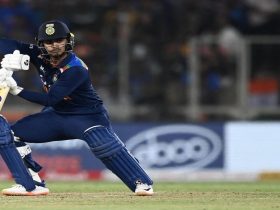 India defeated England in the 2nd Test by a big margin of 317 runs. They outclassed visitors with sheer dominance. And, now the caravans will head to Ahemdabad for the 3rd Test that is slated to begin from February 24, 2020. It is going to be a pink-ball game in which Team India might opt for some changes in the side. There are reports Jasprit Bumrah will return to the team. And, Sunil Gavaskar has predicted that Kuldeep Yadav might be dropped from the side once again.

Kuldeep Yadav is having a tough time as a bowler. In the 2nd innings of the Chennai Test, he took almost six overs to take his first wicket. Although, he two wickets with the ball but still Kuldeep never looked like in his older version, who used to make batsmen dance on the rhythm of his bowling. On the other hand, in a pink-ball game, Virat Kohli will surely go with a team-combination of three seamers and two spinners.

Sunil Gavaskar Feels Kuldeep Yadav Will Be Dropped From The Side

Sunil Gavaskar backed Kuldeep Yadav ahead of the 2nd Test. But, now, he feels that the Indian spinner will not fit in the side for the day-night game. The former player added that if Hardik Pandya is fit then he will directly slot into the side. This will add more strength to the side going into the 3rd game.

“Jasprit Bumrah will be there. You’re looking at three seam bowlers for sure. It’s a pink ball Test so maybe one of the spinners will find themselves out of the team. Most likely it will be Kuldeep because he hasn’t had too many opportunities, and Axar and R Ashwin. Ashwin you can’t drop for the next five years. So that will be the attack,” Gavaskar said on Star Sports.

“Bumrah for sure will be back in the team. You’ll probably have a new-ball attack in Bumrah, Ishant Sharma, and Mohammed Siraj as your three new-ball bowlers, and Kuldeep… he may find himself out of the team because it’s a pink-ball Test. The ball does tend to do a little bit more as evening approaches. And once you play under lights, it’s a completely different seam so I would imagine that would be the only change, Bumrah coming in place of Kuldeep.” he added.