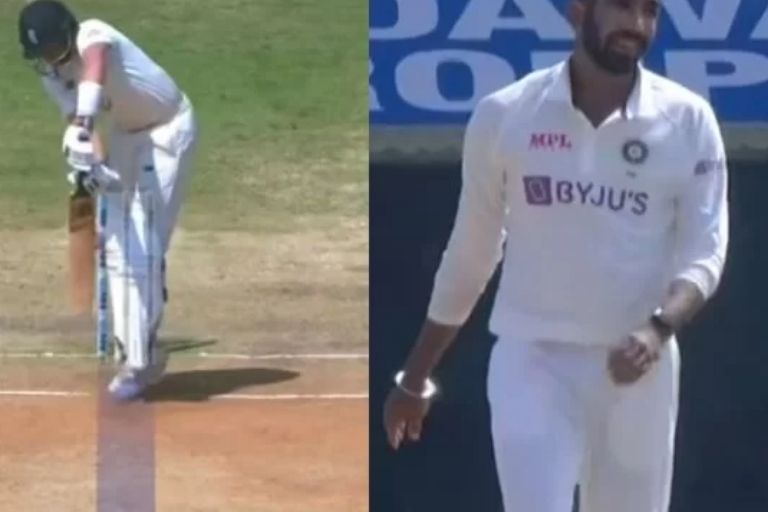 Joe Root, the in-form England skipper was left stunned against a peach of delivery bowled by Indian pacer Jasprit Bumrah in the 2nd innings. The visitors’ captain scored 40 runs off 32 balls before heading towards the pavilion.

In the 1st Test, England looks miles ahead of Team India and they have a mammoth lead of 388 runs that and still counting. The visitors managed a big total of 578 runs in the 1st innings and Joe Root emerged as the star. He managed a beautiful double ton against the host’s bowling unit and got his name scripted in the record books. The right-handed batsman became the only player to score a century in the 98th, 99th, and 100th Test.

Also Read: Virat Kohli’s Wicket Is Certainly The Most Satisfying Of My Career: Dominic Bess

Later on, the bowlers complemented really well and dismissed the overwhelming favorites at a score of 337 runs. Rishabh Pant, Washington Sundar tried their best to rescue their side. But, the duo failed in their task. The southpaw scored another quick knock of 91 runs followed an 85 run knock from Indian all-rounder Washington Sundar.

Dominic Bess became a mystery for the Indian batting line-up. And, he managed to grab an important four-wicket haul. He took important wickets of Cheteshwar Pujara, Virat Kohli, Rishabh Pant, and Ajinkya Rahane that set Team India on the backfoot.

Coming onto the second innings, Indian bowlers gave a tough fight in order to bring their side back into the game. But, Joe Root once again looked at his best with the bat. He came out all guns blazing and set the stage on fire. He hammered 40 runs off 32 balls before Jasprit Bumrah dismissed him.

The Indian pacer bowled a peach of an inswinger that bounced lesser than Root’s expectation and the latter was left stunned. There is no doubt over the fact that the English skipper was outfoxed by Bumrah’s brilliance as he was caught in front of the stumps.

However, England still looked in the prime position to win the game. And, the game looks to be moving towards a draw with only one day of play left in the game.