It was another astounding bidding war for an all-rounder as Kyle Jamieson was sold to Royal Challengers Bangalore at an incredible price of INR 15 Crores. The Reds were the first to bid for the lanky all-rounder from New Zealand as Delhi Capitals also went behind the player. However, the Bangalore-based franchise looked aggressive with their approach to sign the player, and Delhi Capitals decided to opt-out when the bid crossed INR 5 Crores. However, Punjab Kings entered the fray simultaneously, and both teams battled for the player until it became another record signing in the IPL for RCB.

Kyle Jamieson came into the limelight after an impressive showing against India in the Test series. The 6 feet 6 inches tall all-rounder decimated Pakistan later in another test series. He hasn’t played in the IPL before and has experience of playing in 4 T20Is, where he has picked up 3 wickets.

The Kiwi all-rounder recently represented Auckland in the Dream11 Super Smash T20. He picked up 5 wickets and scored 56 runs in 5 matches.

What would Kyle Jamieson bring to Royal Challengers Bangalore?

Bangalore let go Chris Morris before the auction, and Kyle Jamieson would directly replace him in the playing 11. The Royal Challengers have found an upgrade to Morris in the form of Jamieson, undoubtedly. Kyle Jamieson is tall, and he uses his height to good use to extract bounce from the wicket. He also is a decent batsman who could use long-handle to good effect to hit long sixes towards the end. Jamieson would also solve the RCB’s long-pending issue of a deadly pace bowler. New Zealand players are also likely to remain available for full-season, which is an added plus for the Bangalore-based franchise. 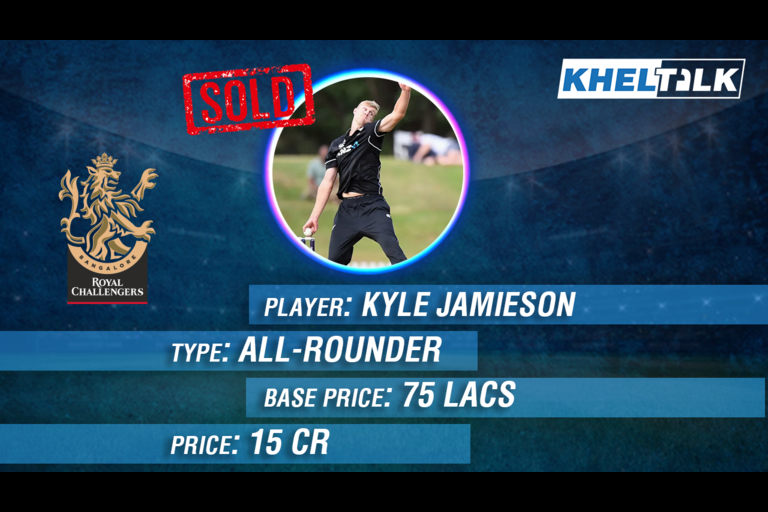