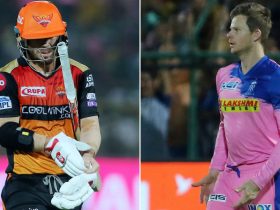 IPL 2021: Steve Smith And David Warner Could Leave As Australia Planning To Suspend Flights From India

Prithvi Shaw had a great game against Punjab Kings and played a decent knock of 39 runs with the bat. He is in the limelight for his scintillating batting form. But, during DC vs PBKS game, he hogged the spotlight for his wayward throw that left Rishabh Pant scared of getting hit. The eagled-eyed cameraman recorded the instance and now the clip of the same is going viral on social media.

Prithvi Shaw is giving a tough fight to his partner Shikhar Dhawan in their race to win the orange cap. The right-handed batsman has managed 308 runs in 8 games at a good strike rate of 166.48. Shaw, who was dropped from the national side after returning from Australia for his poor performance, has managed a strong comeback in form.

The highlighting instance happened in the 2nd over of the match. Mayank Agarwal played the ball towards deep square leg and ran for double. Meanwhile, Prithvi Shaw, who was the designated fielder on that place, scared Rishabh Pant with his wayward throw. In the clip, the DC skipper can be seen keeping both hands on the head and Shaw started laughing after watching his skipper.

Coming onto the match, PBKS gave a competitive target of 166 runs to DC. But, the batsmen of the latter chased down the total with 2.2 overs to spare. From PBKS, Mayank Agarwal managed an unbeaten knock of 99* runs in the absence of PBKS regular skipper KL Rahul. From DC, Shikhar Dhawan finished as the top scorer with 69 runs.