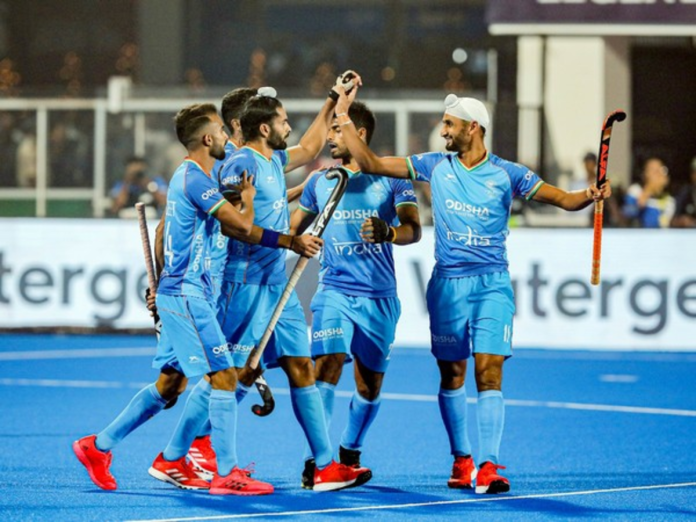 In Pool D of the FIH Men’s Hockey World Cup 2023, the Indian hockey team finished second after defeating Wales 4-2 on Thursday at the Kalinga Stadium in Bhubaneswar.

India will now compete against New Zealand, who finished third in Pool C, in the crossovers for a spot in the quarterfinals. After defeating Spain 4-0 earlier in the day, England edged off India to win Pool D and advance through to the quarterfinals.

The winner of the contest between India and New Zealand advances to the quarterfinal and takes against the Pool B winner. As things stand, Pool B can be won by either Belgium or Germany.

The quarterfinal game will be played at the same location on January 24 after the crossover game on January 22 at Bhubaneswar’s Kalinga Stadium.

India is taking part in a crossover match for the first time at the Hockey World Cup. India won the group stage in 2018 and went straight through to the quarterfinals.

According to the FIH Men’s Hockey World Cup 2023 format, the top four teams from each pool (A through D) progress to the quarterfinals, while the teams that placed second and third in their respective groups will compete in crossover matches for the final four berths.

In spite of having the majority of the ball in the first quarter, India was unable to capitalise on their opportunities.

At the beginning of the second quarter, India won the first penalty corner of the game. However, Harmanpreet Singh’s hockey World Cup barren run from the penalty corner continued as the Welsh defence comfortably stopped his drag-flick.

In the 22nd minute, India quickly gained their second penalty corner, but Harmanpreet Singh’s drag-flick was again rejected by the first runner. However, Shamsher Singh’s stick was able to catch the hard bounce, and he then sent a low shot just inside the post to give India the lead.

India needed goals to advance directly to the round of eight, so the hosts continued their forward strategy in the second half, which gave Wales several good chances to score.

Wales’ first penalty corner came as a result of an error by the Indian defence, but the action quickly switched to the other side of the field when Akashdeep Singh and Mandeep Singh combined to score India’s second goal of the game in the 33rd minute.

Wales tied the score at two at the end of the third quarter, just as India gained momentum with a 2-0 lead, before India could recover. With a low, scorching drag-flick on PR Sreejesh’s left in the 42nd minute, Gareth Furlong scored the game’s opening goal.

Gareth Furlong’s comparable drag-flick was saved by PR Sreejesh in the dying minute of the third quarter, but Jacob Draper from the left slid it high into the goal to tie the score at 2-2.

In the first minute of the final quarter, Sukhjeet Singh and Akashdeep Singh combined to counterattack and retake India’s advantage. India piled on the defensive while Wales searched for a second equaliser to close any remaining gaps.

In the final minute of the play, Harmanpreet Singh finished off India’s Pool stage with a deft drag-flick to make the score 4-2. India will now compete against New Zealand on Sunday in the crossovers for a spot in the quarterfinals.