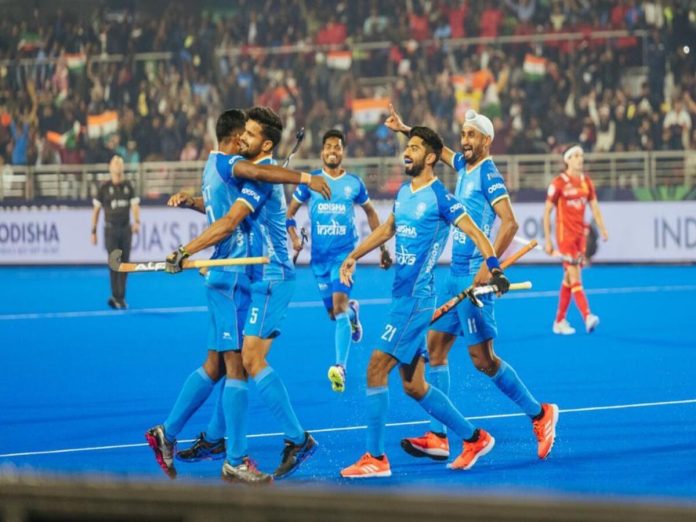 India has secured second place in Pool D’s points standings for the 2023 Hockey World Cup. The host team was unable to secure a top spot in the mega event in Odisha’s quarterfinals by winning a straight entry.

Only the top two finishers in each of the four groups will immediately progress to the quarterfinals. In Pool D, England and India, each scored seven points. However, because of their superior score differential, England came in the first place.

India began their campaign with a 2-0 victory over Spain before drawing 0-0 with England. Harmanpreet Singh and company defeated Wales 4-2 earlier today. India concluded with three wins, seven points, and a +4 score differential.

England started off their campaign by defeating Wales 5-0 before playing India to a scoreless draw. With a 4-0 victory over Spain earlier today, England sealed their passage to the quarterfinals. England won Pool D of the Hockey World Cup 2023 with seven points and a +9 scoring differential.

The Hockey World Cup 2023’s Match 32, which will include England, will be the fourth quarterfinal game. In the crossovers round, New Zealand and India will compete. India will play the Pool B table-toppers in the quarterfinals if they win the match.

The top-placed teams from each group at the completion of the group stage will receive direct qualification for the Hockey World Cup quarterfinals. The teams who place third and second, however, will face off in the crossover with a chance to advance to the quarterfinals.