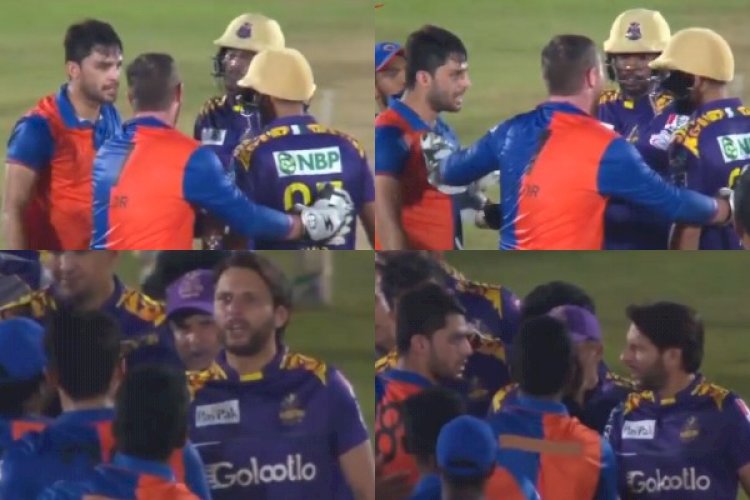 Tuskers beat Gladiators on Monday by a margin of 25 runs in the ongoing Lanka Premier League. This was the first win of the former in this edition. But, the latter failed to open their account in the tournament. Meanwhile, one instance that hogged the spotlight was the fierce war of words between Mohammad Amir and Naveen-ul- Haq. Also, Shahid Afridi joined the altercation at the end of the game.

Tuskers managed to score an imposing total of 196 runs in 20 overs for a loss of 5 wickets. Every batsman in the line-up performed exceedingly well with the bat. Brendan Taylor emerged as the leading run-scorer for Tuskers as he scored amazing 51 runs off 35 balls studded with seven boundaries and one six. Kamindu Mendis also played a cameo of 28 runs off 16 balls. On the other hand, Gladiators failed to chase down the target and ended losing the game by 25 runs. Danushka Gunathilaka played a marvelous knock of 82 runs but it was never enough to win it for his team.

The highlighted instance of the game started in the 18th over. Mohammad Amir smashed a boundary off Naveen-ul-Haq that was not liked by the pacer. And, after the over finished, the right-handed pacer was seen abusing Gladiators batsman. In the end, both the players came face to face and other players on the field had to come between the two.

In the 20th over, Amir once again showed his batting class and smashed Naveen-ul-Haq for a six. It was visible that the Pakistan -born cricketer was not happy with the conduct of the pacer. In the end, once again the duo was spotted chirping some words against each other in anger. The Tusker players had to intervene between the two players once again on the ground.

Later on, Shahid Afridi also joined the fight and he was seen asking Naveen-u-Haq that why he was so angry and what had happened to him (Kya Ho Gya). He also asked some other things that were not audible to the fans. Furthermore, the pacer also replied in his fashion to the former Pakistan all-rounder.