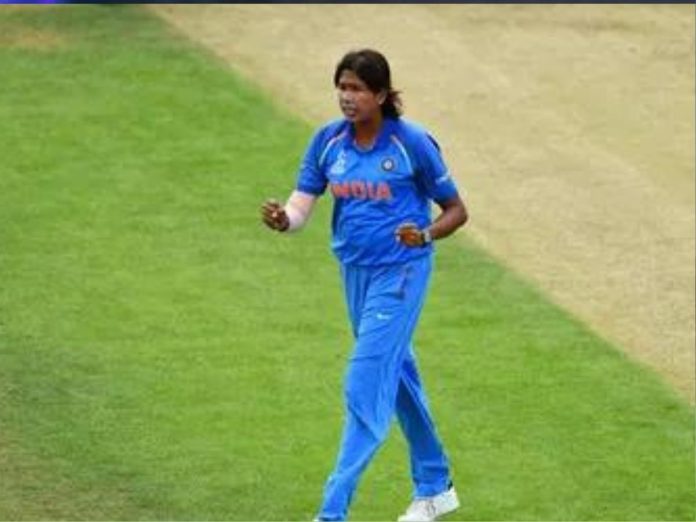 Jhulan Goswami is an Indian cricketer who plays for the Indian Women’s Team. Born on 25 November 1982, the 40-year old bowler is arguably the best women’s bowler that the country has produced

The West Bengal-based bowler has played for the Indian side in all three formats. Jhulan Goswami made her Indian debut on 6 January 2002 vs England in an ODI game.

Jhulan is the leading wicket-taker in W-ODIs. She has also named the ICC Women’s Cricketer of the Year in 2007. Owing to her prowess, she has won many other awards as well, we will be looking at these in this blog.

In this article, we will have a look at Jhulan Goswami’s Salary, Net Worth, Personal Information, Career details, Husband, Controversies, FAQs, etc

Jhulan Goswami Net Worth: Jhulan Goswami’s net worth is reported to be around 8 crores in Indian Rupees. She has earned her net worth through endorsements, her salary during her playing career, her investments, etc.

Jhulan Goswami reportedly has an annual salary of 50 lakhs with the BCCI. To add to this, the bowler earns between INR 15,000-25,000 for representing Bengal in a domestic game.

Here are the brands that endorsed Jhulan Goswami during a point of time in her career:

Jhulan Goswami’s House: The Indian legend was born and brought up in Chakdaha, West Bengal, India. Back in the day, the “Chakda Express” lived in a house made with a tin roof. But since then Jhulan has gone leaps and bounds to improve her lifestyle and the lifestyle of her family.

She still reportedly lives in the same village. But Jhulan Goswami has a well-furnished house now. Not many details are known about the Indian legends house at the moment. She reportedly also has a house in Kolkata, West Bengal, India.

Jhulan Goswami Career Records for India (as of 3rd Feb 2023)

Bollywood actress Anushka Sharma is set to act in a movie named “Chakda Xpress“. The movie will be revolving around India’s leading wicket-taker Jhulan Goswami. The movie is set to release on OTT Platform Netflix in the upcoming months. It will be up on the OTT Screens on 9th September 2022.

The Indian women’s team superstar has not married anyone as of yet. She was focused completely on cricket and hence did not explore any romantic relationships. Even if she was involved with someone, Goswami has made sure to keep things private. We will update this subheading if we find information from a quality source.

Aahana Kumra Controversy: The Bollywood actress paid a tribute to Jhulan Goswami by cosplaying herself as the Indian cricketer. For this, she applied darker make-up to match Jhulan Goswami’s skin tone. This was not taken positively by the fans and they tore down the comments section on her social media post for the same.

Jhulan Goswami has personally not been part of any onfield or off-field spat. She is a “professional” both on and off the field and this attitude has won her a lot of support and friends throughout her career. The West Bengal bowler has been a top-notch human being and we expect that she continues to do so in the future as well.

Jhulan Goswami generally posts about cricket, her pastime activities, her endorsements, and her friends and family.

Q- Who is Jhulan Goswami’s husband?

Jhulan Goswami has not married. She has been focused on her cricket career.

Q- Against whom did Jhulan Goswami make her India debut?

Q- Who is Jhulan Goswami’s boyfriend?

Jhulan Goswami is currently single as per reports

Yes, she is the bowling coach as well as a player on the Indian women’s team.

Her biopic is named Chakda Express. It will come out in late 2022 on Netflix. Anushka Sharma is acting in Jhulan’s part in the biopic.