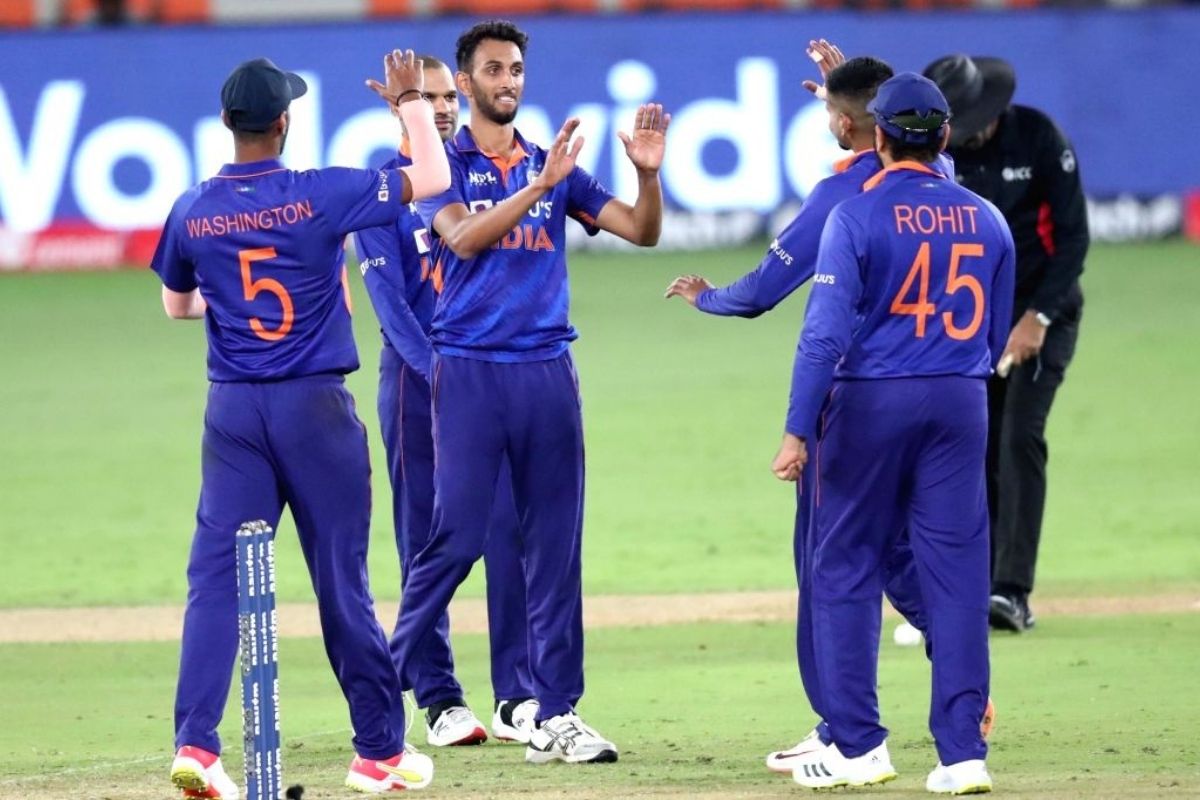 Prasidh Krishna is an Indian cricketer who currently plays domestic cricket for Karnataka and has also recently made his debut for India. Born on 19 February 1996 in Bengaluru, Karnataka, India, Krishna is considered one of the best fast bowlers in domestic cricket at the moment.

Krishna made his debut for India against England on 23 March 2021. The fast bowler has been part of the Indian Premier League as well. In the IPL, Prasidh Krishna was first picked by the Kolkata Knight Riders in 2018 and was part of the team for four seasons.

Owing to his prowess, Prasidh Krishna was picked up by the Rajasthan Royals for the 2022 season. The speedster has been picked up for a whopping 10 crores.

In this article, we will have a look at Prasidh Krishna’s Salary, Net Worth, Personal Information, Career details, Girlfriend, Controversies, FAQs, etc

Prasidh Krishna Net Worth: Prasidh Krishna’s net worth is reported to be around $1.5 million or 12 crores in Indian Rupees. He has earned his net worth through endorsements, his playing career, his IPL salary, etc.

Prasidh Krishna’s Salary: Between 2018 and 2021, the fast bowler used to earn Rs. 20 lakhs as his IPL salary. But now, the bowler will be earning Rs.10 crores after he was picked up in the 2022 auction by the Rajasthan Royals

To add to this, the speedster also gets a salary for playing first-class cricket, International cricket for India.

Prasidh Krishna’s Car Collection: Not much is known about his car collection for now, but we will surely update this list in the coming days.

Prasidh Krishna’s House: Not much is known about his house. But as per other news sources, the fast bowler owns a luxury home in Bangalore, Karnataka, India.

Karnataka (Domestic Career): The pacer has been part of the Karnataka setup since 2015. His prowess first came to light when he picked up 4 wickets in a match for his state against Bangladesh A.

Krishna has since made his List-A debut for Karnataka as well, playing more than 50 games combined in the Vijay Hazare and Syed Mushtaq Ali tournaments.

Indian Premier League (KKR): After going unsold in the 2018 auction, Prasidh Krishna was brought in as a replacement by the Kolkata Knight Riders for the injured Kamlesh Nagarkoti. He made his IPL debut against Mumbai Indians on May 6, 2018.

Since then, the speedster has played 34 IPL games for KKR, picking up 30 wickets. He also helped his team reach the finals of the 2021 IPL edition but lost out to CSK in the finals.

Prasidh Krishna was picked up by the Rajasthan Royals in the 2022 IPL auction. He was bought for a whopping 10 crore Indian rupees.

Team India: Prasidh Krishna was named a part of the Indian squad for the series against England in March 2021. He made his ODI debut on 23 March 2021 and had impressive bowling figures of 4/54.

The bowler was selected in India’s series against West Indies in 2022 and he was again impressive with his gritty bowling. Krishna also won the man of the match for figures of 3/27 in the third ODI.

As of 16th February 2021, Prasidh Krishna has picked up 18 wickets for India in ODIs.

One Day Internationals (For India)

We are waiting in anticipation and hoping that he will add more major accomplishments to this list soon.

There is no news or rumors surrounding Prasidh Krishna’s girlfriend at the moment. Hence, we will update this when we come to know about the same!.

Getting shouted on by Dinesh Karthik: Karthik is generally cool on the field, but the keeper lost his temper in the 2018 IPL game against Sunrisers Hyderabad.

The game was a high-stakes affair with the winner going through to the finals. Prasidh Krishna took a wild throw at the non-striker’s end and conceded extra runs. This made Dinesh Karthik angry, who was recorded by the stump microphone shouting “f***ing fool” at the youngster. The keeper was frowned upon by many people as they felt that he was too hard on the youngster.

Apart from this, Prasidh Krishna has stayed very professional throughout his young career. There is not a single controversy surrounding the young Indian fast bowler at the moment.

The Gujarat Titans player is active on social media as well

Prasidh Krishna generally posts about cricket, his pastime activities, and his friends and family.

Q- What is the name of Prasidh Krishna’s kid?

He does not have any children yet

Yes, he is playing cricket actively.

Q- Against whom did Prasidh Krishna make his India debut?

Prasidh Krishna made his Indian debut against England in March 2021.

It is reported that he currently lives in Bangalore, Karnataka, India.

We believe that his biggest accomplishment yet was to represent the Indian national team.

Q- Who is Prasidh Krishna married to?

Prasidh Krishna is currently unmarried. The 26-year old is focused on improving his cricketing career at the moment.

Q- Who does Prasidh Krishna play for in the IPL?

Prasidh Krishna was picked up by Rajasthan Royals for 10 crores in the 2022 IPL auction.