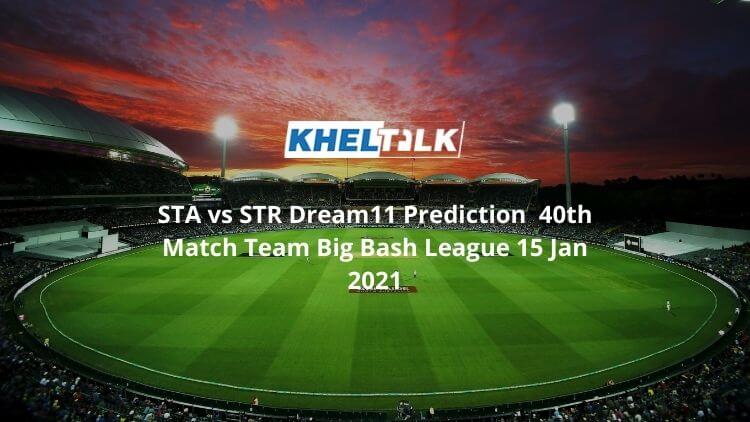 Here are the stats for the teams STA vs STR:-

The pitch of MCG offers a fine balance between bat and ball. While the bowlers get some assistance early on with some bounce, the batsmen will have it easier in the latter part of the innings.

Melbourne doesn’t look good for a game on Friday. There will be scattered thunderstorms on the day and We can only pray that it will be just a phase. Hopefully, we will get a full match. The temperature is expected to be 20-degree Celsius and the humidity to be 48%.

Since there will be rain, we can expect a sticky wicket. While the wind will play a major role here, the power-hitters might find it easier to clear the ground and we can expect something around 170-180.

Melbourne Stars have some of the best hitters in their line-up but they are currently having a mixed tournament and this is one of their must-win matches.

The team will be looking forward for this match to take revenge on the Strikers who went on to win their previous clash. After a brilliant start to the tournament, Stars are currently struggling and they will have to give it all to win this match and to stay in the hunt now.

While the team is going through a difficult phase, one might expect them to back the same playing XI that went on to play the last match.

Adelaide Strikers did well to bounce back in the last contest to win against the Stars and they will be hoping for a similar performance here.

Adelaide Strikers can move to the 2nd spot if they manage to win here. They will be depending on their bowling attack which is probably the strongest in the tournament.

While the team is desperately looking for a win here, there might not be any change to the line-up from the last match.

Here are a few predictions for the captain pick for the STA vs STR clash.

Alex Carey- Carey will be looking to lead the team from the front here. He so far is having a decent tournament with 279 runs to his name.

Glenn Maxwell- He has contributed with both bat and ball. He is the 2nd leading run-scorer of the tournament from the Stars at the moment.

Wes Agar- He is the 2nd leading wicket-taker of the tournament with 17 wickets. He won the player of the match award in their last head-to-head.

Marcus Stoinis- He is the leading run-scorer for the Stars and he has 277 runs in the tournament so far.

He is one of the leading run-scorers for the Stars at the moment. He also has a strike-rate of 123.36.

He will be opening the innings against the Strikers once again and we can expect fireworks from him here.

He is the leading wicket-taker for the Stars at the moment and it will be interesting to see how he goes here.

He has been a consistent performer for the team in the tournament. He has a strike-rate close to 137 here.

Salt has the ability to win matches single-handedly. We can expect a big knock from him here soon.

Peter Siddle has been consistent throughout the tournament and in the absence of Rashid Khan, he will be having an added responsibility in the bowling line-up.

Here is the Dream 11 Team prediction for STA vs STR. We are going with players who are currently in good form and can win the match with ease.

Who Will Win Today Between STA vs STR Dream11 Prediction, 40th match?

According to Kheltalk’s astrology STA vs STR Dream11 match Prediction, STR will win the match.

According to Kheltalk’s STA vs STR Dream11 toss prediction, STR will win the toss and ask STA to bat first.

Follow us on Telegram For Latest Updates. Here is the link to our Telegram Channel: Click Here