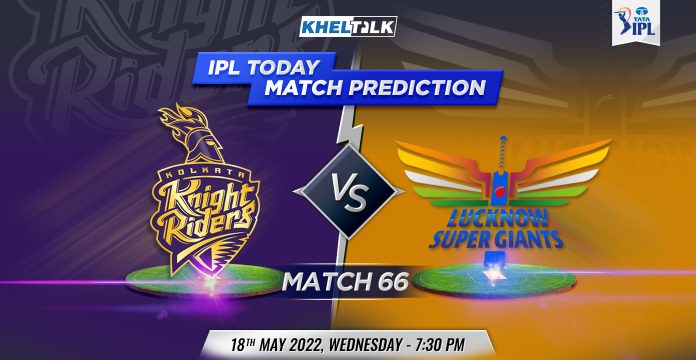 Welcome to the KKR vs LSG Today Prediction curated by Kheltalk cricket experts. Kolkata Knight Riders will take on Lucknow Super Giants in the 66th match of the TATA IPL, 2022 on Wednesday, 18th May 2022 at DY Patil Stadium. Keep on reading for more information on the KKR vs. LSG game.

Kolkata Knight Riders are still in the hunt for playoffs but will have to go through strong Lucknow Super Giants in their last match of the tournament. The Kolkata team have won the last two games and their teams look way more solid now after chopping and changing throughout the tournament.

Their spinners are again spinning their web in middle overs and slow pitches are now working in their favour. Although their batting still hasn’t performed at their potential and after Rahane’s injury, their misery in the opening slot is likely to continue.

On the other hand, Lucknow has made their task tough for playoffs with two back to back losses. They were touted to finish in the top 2 after reaching 16 points mark with 3 games in hand but now they must win the last game to even qualify for playoffs. Their bowling has been consistent but their batting has failed in the last few matches.

They are heavily dependent on KL Rahul and Deepak Hooda for runs and experienced campaigners like Krunal Pandya, and Marcus Stoinis need to start performing with the bat.

Lucknow and Kolkata both are coming off contrasting recent form but both teams desperately need to win this game. Kolkata Knight Riders do have an outside chance for playoffs while Lucknow will be hoping to win and with a big margin to make their case strong for a top 2 finish.

Top Batsmen for KKR vs. LSG

Top Bowlers for KKR vs. LSG

KKR vs. LSG Today Match Prediction, IPL 2022, Who Will Win the Match?

Lucknow Super Giants have already defeated Kolkata Knight Riders once on a slowish pitch and DY Patil is again expected to be a slower side which will suit their style. They aren’t in the best of form at the moment but will look to deliver a thumping performance before battling out in the playoffs. Their opponents Kolkata have a very fragile batting which could heavily struggle against their quality bowlers. We think Lucknow Super Giants will win this match.