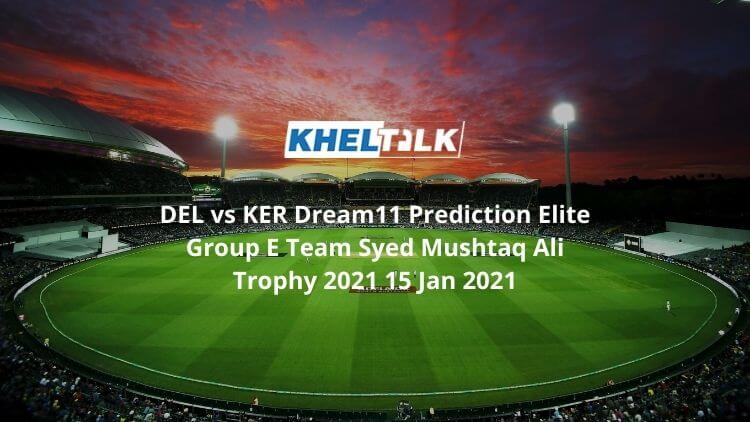 Here are the stats for the teams DEL vs KER ;

The surface at Wankhede is always batting friendly and doesn’t support bowlers much. The red clay on the surface makes it tough and bowlers get an extra bounce.

The weather reports are normal. A bright sunny day with the wild at 8 km/h and humidity around 62 percent. No chance of rain.

The wild can help the bowlers with an extra swing but make sure you choose batsmen as your captain and vice-captain as bowlers here will not earn you many points.

Winning both the games, Delhi has set the tone for the rest of the tournament. Achieving massive wins over Andhra Pradesh and Mumbai would have surely boosted their confidence. Hopefully, they will not let their momentum slip from their hands.

No changes are expected from the Delhi side. Opening batsmen Dhawan and H Dalal struggled in the previous game but players coming down the order players Nitesh, Rawat, Himmat Singh, and Lalan Yadav played some sensible shots with the bat and won the game by 6 wickets. Delhi’s bowling department is stuffed with immense talents such as Ishant Sharma, Pawan Negi, and Lalit Yadav.

The last game against Mumbai would be remembered for ages. Young talent M Azharuddeen scored a ton off just 37 balls which is the second-fastest century in the tournament so far.

After an emphatic win the previous game, Kerela would not dare to make any changes. Skipper Samson will again rely on Asif, Shreesant, and Thampi in the bowing department. M Azharuddeen looks in superb form and can turn out to be an x-factor player for Kerela. Uthappa started well but could only manage 33 runs in the last game, however, he had a great strike rate in the game against Mumbai.

While the team is likely to play the same eleven from the previous match, No changes will be seen.

Here are a few predictions for the captain pick for the DEL vs KER clash.

M Azharuddeen – 37 balls century have made him a talk of the town. His hitting ability helped them win the game in just 15.5 overs. He is now the second-fastest century hitter in this tournament after Rishabh Pant.

Nitesh Rana – N Rana has a mixed IPL season last year but we are aware of his capabilities. Last season, he scored 304 runs in 10 Syed Mushtaq Ali innings at an average of 33.78. Don’t miss him out. Also, he chipped 12 wickets at an economy of 6.07.

Shikhar Dhawan– He is yet to make his mark in the tournament. He is coming after great IPL season and will get back on track soon. In 16 T20s this season, Dhawan has scored 603 runs at an average and strike rate of 46.38 and 145.65 respectively to register his best-ever season.

J Saxena- Jalaj Saxena has bagged 14 wickets from 8 matches in the tournament last season. He got three wickets in the last game and even kept himself economical. Don’t miss him out.

Apart from the DEL vs KER Dream 11 prediction for the captain, here are a few players who are likely to star, here according to the Dream 11 Prediction by our experts.

Sachin has stepped up on several occasions and is capable of taking his team out of danger. He has an outstanding season last year and is expected to perform again

Thampi has performed consistently in several tournaments and likely to perform here as well. He has an amazing season last year and will have the same intent this year as well.

Himmat has made us believe that he can stand up and deliver in crucial times. He played a sensible inning in the last game.

Sharma has a lot of international experience and has impressed his fans and cricket fraternity on many occasions. His wicket-taking ability makes him an x-factor player.

Here is the Dream 11 Team prediction for DEL vs KER. Since the pitch assists the batsmen, we have picked more number of batsmen in our team.

Head To Head (Delhi vs Kerela)

Who Will Win Today Between DEL vs KER Dream11 Prediction?

According to Kheltalk’s astrology DEL vs KER Dream11 match Prediction, KER will win the match today.

According to Kheltalk’s DEL vs KER Dream11 toss prediction, KER will win the toss and will opt to bat first.

Follow us on Telegram For Latest Updates. Here is the link to our Telegram Channel: Click Here