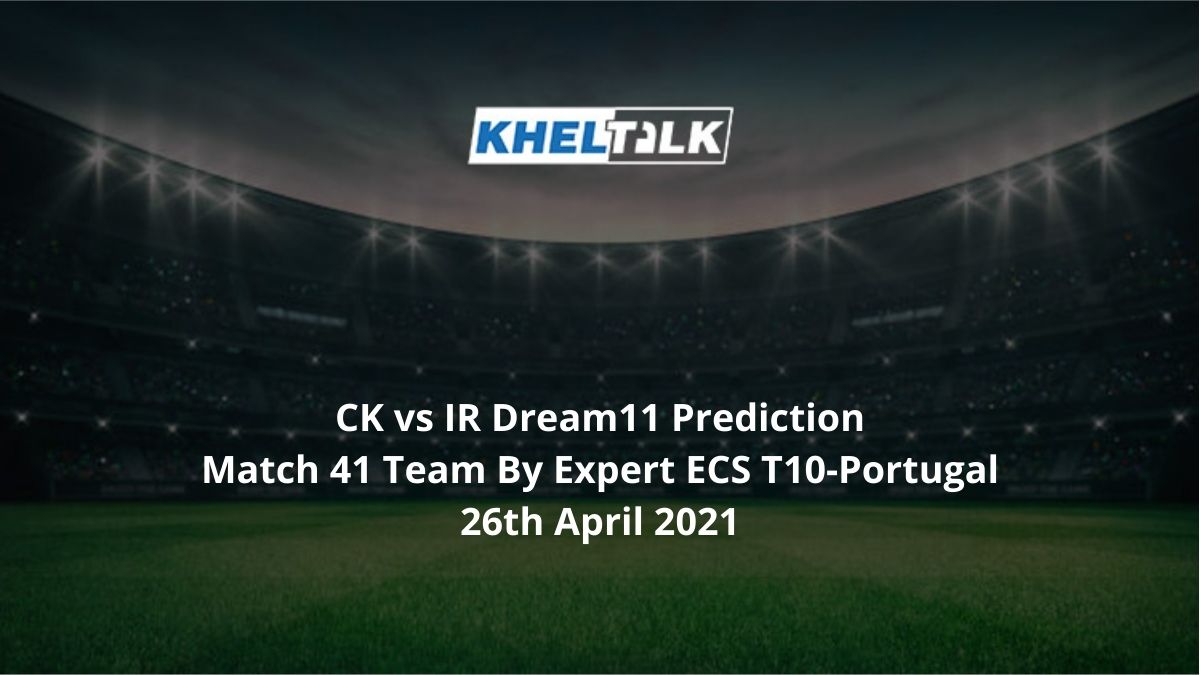 According to CK vs IR Dream11 Prediction for Today’s Match Fantasy Cricket, Coimbra Knights will take on Indian Royals in the 41st match of the ECS T10 Portugal on Monday, 26th April, at the Estádio Municipal de Miranda, do Corvo, Keep reading to find out about the ECS-T10 Portugal Match 41 CK vs IR Dream11 team today.

Coimbra Knights and Indian Royals are the two teams to face off in their next fixture of Ecs Portugal T10 2021. Talking about the Indian Royals, they still have chances to move ahead in the tournament, But Coimbra Knights have been one of the most disappointed teams after Moranda Dragons.

So far, the Royals have won four out of 10 games and this makes them sit at the 5th spot of the standing, meanwhile, Coimbra Knights have been on the rocks with just one win in 10 games. They are at the second last spot at the points table.

Here are the stats for the teams IR vs MD

90% of the matches have been won here batting first, so the team winning the toss is likely to open the innings first. The average 1st inning score is 90-100 with both bowlers and batters getting equal support from the surface. However, bowlers have been a bit dominating in the tournament.

There is no chance of rain, however, the temperature eis expected to be cooler as compared with prevous games. According to the forecast, 15.86 degrees Celcius is expected today and during the match time.

Indian Royals have a better batting line up, so make sure, you pick more batsmen from Royals. Pedro will surely score runs for Knight. Don’t miss him out. Go with the combination of 6:5.

Coimbra Knights played their last game against Oporto Cricket Club who have had a decent run so far. Chasing down a small target of 85 runs posted by Oporto, Coimbra Knights miserably failed with the bat and were restricted for 68 runs, despite having seven wickets in hand.

Talking about the Indian Royals, they played their last game against the best team – Gorkha 11 and they lost the game by 9 wickets. They will be looking forward to bouncing back strong when they meet the inconsistent team in their next encounter.

Pedro Madeira has been consistent with the bat. Playing 8 innings, he has scored 148 runs at a strike rate of 113.84 including 11 fours and six sixes. He will surely help you earn points, the best choice as vice-captain

Chris Redhead has been lethal with the ball as no batsmen have got answers to his deliveries. In 10 games, he has bagged 15 wickets at an economy of 6.15. He is against expected to trouble the batsmen with his variations. He can be your captain choice.

Amandeep Singh has turned out to be an all-rounder performer as he has contributed well with the bat as well as with the ball. In 10 innings, he has scored 196 runs at a strike rate of 134.24 along with chipped seven wickets in his spell. He can be a match-winner again.

Sukhwinder Singh is the leading wicket-taker for the side. In 10 games, he has 9 wickets to his name at an economy of 8.67. This wicket-taking bowler can help you earn points in the initial phase of the game.

Who Will Win Today Between CK vs IR Dream11 Prediction, 42th Match?

According to Kheltalk’s astrology CK vs IR Dream11 match Prediction, Team IR will win the match. When compared with the quality of players Coimbra Knights have, the Royals clearly have an upper hand as their top order is more consistent with the bat.

According to Kheltalk’s CK vs IR Dream11 toss prediction, IR will win the toss and will opt to bat first. Well, their top order will surely not let the team down and make sure the team post 100 runs target so that it’s getting easier for their bowlers to defend the total.