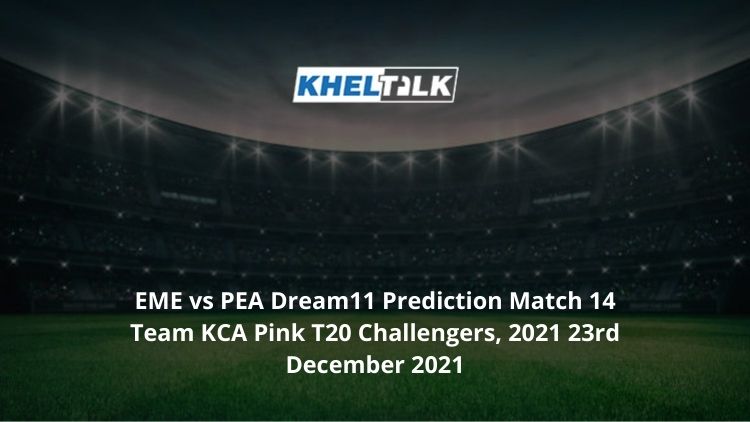 According to EME vs PEA Dream11 Prediction for Today’s Match Fantasy Cricket, Team Emerald will take on Team Pearl in the 14th match of the KCA Pink T20 Challengers, 2021 on Thursday, 23rd December, at the Sanatana Dharma College Ground, Alappuzha, Kerala. Keep reading to find out about the KCA Pink T20 Challengers, 2021 Match 14th EME vs PEA Dream11 team today.

Team Pearl looks in good space as they have won three out of five games and will look to keep the momentum alive. They registered a close win in their previous game against Team Amber. Batting first, Pearl posted 112 runs on the board and in response, Amber was restricted for 110 runs. On the other hand, Team Emerald is coming after a victory against Sapphire by eight wickets. Emerald sits at the top of the points table with three wins and four games.

The surface at the Santana Dharma College Ground will provide equal support to batters as well as the bowlers. A score of around 150-170 is quite defendable in the second inning.

Minnu Mani has scored 154 runs in four innings with the highest score of 56 runs and has a strike rate of 131.56. Manu even has nine wickets to his name. He has performed consistently for his side and will continue to do it.

Keerthi James has been lethal with the ball for Pearl. In four games, he has chipped eight wickets with the best figure of 3/20 and has an economy of 5.87. James has even scored 59 runs off his bat.

Vinaya Surendran has chipped six wickets in four games with the best figure of 3/14 and has also been super economical in his spells.

Divya Ganesh has hammered 80 runs in five innings with the highest score of 29 and is likely to make some valuable contribution once again.

Who Will Win Today Between EME vs PEA Dream11 Prediction, 14th Match?

According to Kheltalk’s astrology EME vs PEA Dream11 match Prediction, the EME will win the match. Looking at their current form, it will not be easy for any opposition to dominate the game. Their batting and bowling department has everything to demolish any opposition.

According to Kheltalk’s EME vs PEA Dream11 toss prediction, EME will win the toss and opt to bat first here. The team batting first has more chances to win this game. Chase hasn’t been easy here.