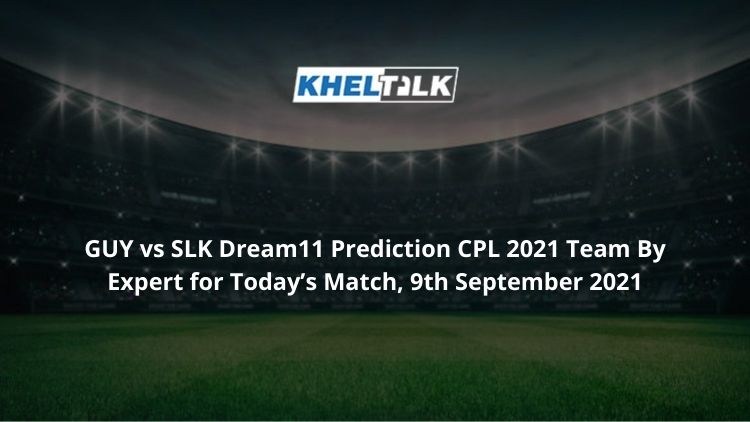 Amazon Warriors and Lucia Kings will lock horns once again in this contest. When these two met earlier, Kings came out on top with ease. Kings only made 149 runs. However, Amazon Warriors had failed to chase the same. They went down by 51 runs and had scored only 98 runs in reply.

Lucia Kings are one of the teams in contention for the playoffs here. The team has won four matches while losing only two. They are currently in the third spot.

Going by what we have seen in recent contests, the pitch has assisted the batters more in recent times. One can expect an equal contest between bat and ball here and the middle overs will be the key in this contest.

It is going to be a cloudy evening at Warner Park. There is almost zero percent chance for rains here. The temperature is likely to be around 26 to 29 degrees Celcius.

After a poor start to the tournament, the team has bounced back very well to win back-to-back matches. They are likely to win this one as well. A win here will take them to a spot higher in the points table. Faf du Plessis’ form will be the key in this contest.

Odean Smith has been the revelation in this tournament. He has managed to pick up wickets at regular intervals and also has scored runs when needed. Also, Chandrapaul Hemraj’s redemption is something that you can bank on in this game.

Mohammad Hafeez is the best choice for the captain here. He will be opening the bowling as well as the batting for the team and is likely to play a major role in this contest.

Chandrapaul Hemraj recently smashed a ton in the tournament and is in good touch. One can back him here to come up with something special. He will also roll his arms for a few overs here.

Nicholas Pooran needs no introduction. The skipper might not have scored big runs here but he has certainly done well when it comes to quick cameos. Even in the last head-to-head contest, he was the star performer for the team.

Odean Smith might not be a famous pick for the captain but he is certainly capable of adding value to the fantasy team. In the last head-to-head contest, he had a cameo as well as three wickets.

Imran Tahir is yet to perform up to his standards in the tournament. He certainly had his days but not up to his mark. It is only a matter of time and this could be his day.

Faf du Plessis had a poor start to the tournament but he has managed to make a comeback very well. He recently smashed a ton while opening the innings for the team and he is certainly the favorite for the captain here.

Tim David can be backed here for his quick cameos. He began the tournament well with two big knocks but since then, he couldn’t add much to the tally. One can expect him to bounce back soon.

Andre Fletcher is the best choice in the keeper’s category. He will be opening the innings for his team and one can expect him to chip in for a good knock today.

When these two teams met earlier, Roston Chase was the star performer. He had his best T20 Score, smashed 85 from just 50 deliveries. The knock had seven mammoth sixes too.

Who Will Win Today Between GUY vs SLK Dream11 Prediction, 22nd match?

According to Kheltalk’s astrology GUY vs SLK Dream11 match Prediction, Lucia Kings will begin this contest as the favorites to win this contest. Lucia Kings have defeated Amazon Warriors with ease when these two teams met earlier in the tournament. One can expect the same result here as well.

According to Kheltalk’s GUY vs SLK Dream11 toss prediction, Amazon Warriors are likely to bat first will win here. Both teams will look to bat first at this venue as both teams have a good record when it comes to batting first.