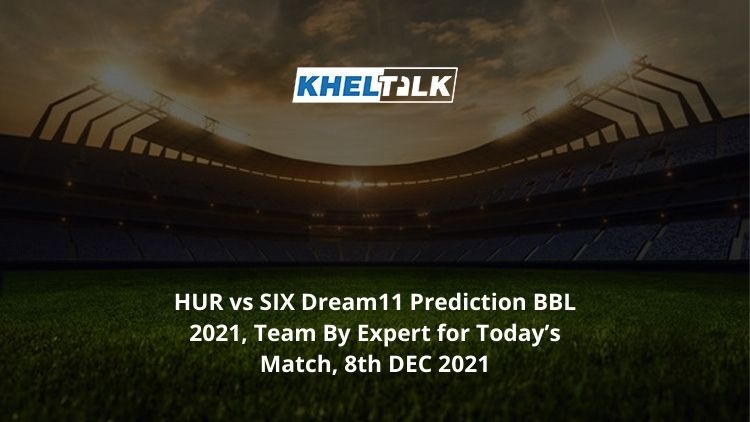 Welcome to HUR vs SIX Dream11 Prediction for Today’s Match Fantasy Cricket, Hobart Hurricanes will take on the Sydney Sixers in the BBL match on Wednesday, December 8, 2021, at UTAS. Keep reading to find out about the BBL HUR v SIX Match Dream11 team today.

In their first contest in the tournament, they showed why they are the champions. They proved too good for the Melbourne Stars, went on to win the match by a huge margin. The captain Henriques led the batting attack from the front. It will be interesting to see how they go against a good pace attack of Hurricanes.

This is going to be a high-scoring game as the batters will have the upper hand here. One can expect both teams to go for chasing as the pitch will not change much during the course of the game.The average first innings score at this venue is close to 150

The weather will be sunny throughout the day. The temperature will be around 16 to 17 degrees Celcius during the contest and there is no chance for rain.

The team had a massive win against Stars earlier in the tournament and they are likely to go in with the same playing eleven in this contest. Hayden Kerr will be the player to watch out for here.

The team has a good line-up and are likely to put up a fight against Sixers here. All eyes will be on Riley Meredith. The pacer was the breakout performer in the last edition.

Josh Phillipe had a good start to the tournament. In the game against Melbourne Stars, he ended up scoring 83 runs from just 47 deliveries. The knock had eight fours and three sixes.

James Vince has been one of the consistent performers for Sixers in recent times. Even in the last game he did well to score 44 runs. He had a strike rate close to 152 in that contest with six fours to his name.

Moises Henriques was the star performer with the bat in the last game. The skipper led from the front with an unbeaten 76 runs from just 38 deliveries. The knock had three sixes and eight fours.

Steve O Keefe turned the match around in the Sixers favor with some brilliant bowling. The pacer had four wickets while giving away just 14 runs from his four overs.

Sean Abbott was yet another star performer with the ball in the last game.He had three wickets from his three overs while giving away just 14 runs. He will be keen to add more wickets to that tally here.

Short will lead the batting attack of Hobart Hurricanes. The all-rounder has 3821 runs from his 120 T20s while striking at 133.60. He has 29 fifties and two tons to his name.

Who Will Win Today Between HUR vs SIX Dream11 Prediction, Match 4?

According to Kheltalk’s astrology HUR vs SIX Dream11 match Prediction, Sixers will begin this contest as favorites. They are the best team in the tournament at the moment and they will look to dominate once again just like they did against Melbourne Stars

According to Kheltalk’s HUR vs SIX Dream11 toss prediction, Sixes will win the toss and they are likely to bowl first in this contest. Since most matches went to the team batting second, the teams will opt to bat second here.