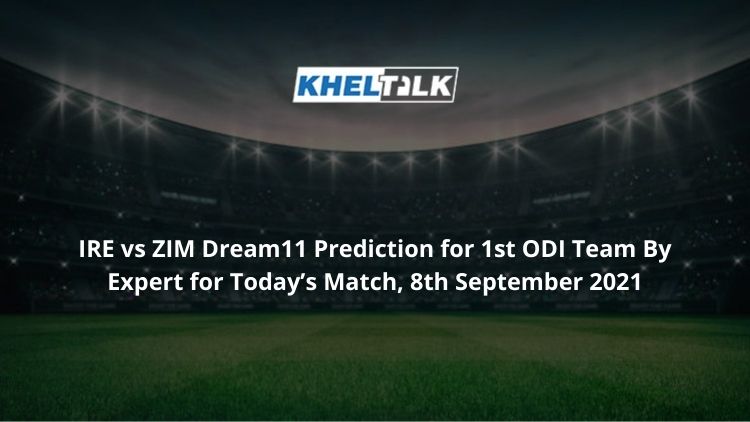 Welcome to IRE vs ZIM Dream11 Prediction for Today’s Match Fantasy Cricket. Ireland will take on Zimbabwe in Match 1 of the Zimbabwe tour of Ireland and Scotland 2021 ODI series on Wednesday 8th September at Civil Service Cricket Club, Belfast. Keep reading to find out about the Ireland vs Zimbabwe ODI Match 1 IRE vs ZIM Dream11 team today.

Ireland and Zimbabwe would not move on to square off in the limited over format. Ireland would be highly motivated after sealing the five-game T20 series against Zimbabwe by 3-2. Zimbabwe started their T20 campaign with a close win by three runs. However, visitors somehow failed to carry a winning momentum in the upcoming games and allowed the host to notch the next three games. Hopefully, a win in the previous game will surely boost their confidence coming into the ODI series. They would try not to repeat previous mistakes.

The surface at Civil Service Cricket Club, Belfast is expected to help the pacers. Batsmen will find it tough to score runs at this venue. They must first settle themselves and try risky shots. The average inning score at this venue is 210.

The weather on the matchday is cloudy. There is a good chance for rain as well. However, it is unlikely to take over the day. One can expect a full match here. The temperature will be around 26 degrees Celcius.

Paul Stirling and Kevin O’Brien will open the innings for Ireland, followed by A Balbirnie and H Tector. Neil Rock and W McClintock will look after the middle order, while J Little and Simi Singh will lead the bowling department.

Brendan Taylor would open the innings alongside Chakbva. Sean Williams and Madhevere are some notable names in the middle order. Sikander Raza will do the late hitting for the side. Blessing Muzarabani and Richard Ngarava will lead the pace attack.

Paul Stirling has been consistently performing for the side. In his last ten innings, he has scored 466 runs at an average of 46.60. This top-order batsman has helped his side taste victory several times. Don’t miss him out.

Harry Tactor is another reliable Irish batsman who has an average of around 36.67 in the last games. He has scored 330 runs in 10 innings at a strike rate of 69.76.

Simi Singh and Josh Little are two main Irish bowling options. Both have been super economical lately and have chipped wickets at regular intervals. Simi has 16 wickets while Little has bagged 13 wickets in 10 games.

Brendan Taylor has always been a hope for the Zimbabwe side. He has turned up at crucial stages and is expected to do that again. In the last 10 ODIs, he has scored 338 runs at an average of 33.80.

Sean Williams must be your go-to man into this series. Williams has been super consistent with his bat. In the last six innings, he has hammered 308 runs at an average of 61.60 and a strike rate of more than 80.

Blessing Muzarabani has chipped 10 wickets in the last six games at an economy of 4.74. He has been a core bowler for Zimbabwe in death over. He is one best choices as vice-captain.

Who Will Win Today Between IRE vs ZIM Dream11 Prediction, 1st ODI?

According to Kheltalk’s astrology IRE vs ZIM Dream11 match Prediction, Ireland will begin this contest as favorites. They would want to get back on track after losing their last T20. The Irish side has been more dominant on the tour and will keep the momentum going. Ireland averages 39 runs per match from their opening partnership in their last ODI series, while Zimbabwe averages 14.33.

According to Kheltalk’s IRE vs ZIM Dream11 toss prediction, Zimbabwe is likely to bat first here. The team batting first has more chances of winning the game as the pitch tends to get slower in the second innings.